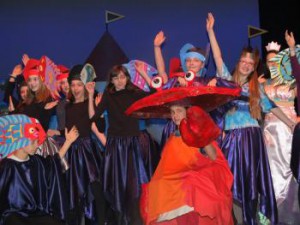 On Wednesday, March 30, 2016 Chris Wolf Show, our special guests were cast members, Jack Lawrence, Annabel-Milisa Parker, Sam Maltese, Jesse Bifulco, Cam Henderson and Angus Carter, of “The Little Mermaid” production by Camden Rockport Middle School. The cast members talk about the show and sang a song from the production.  Be sure to watch below for a sample of what will be happening and to see some of our fine young people at work. A fun time was had by all!

Two shows only. Friday, April 1, at 7 p.m. and on Saturday, April 2 at 3 p.m. Strom Auditorium at Camden Hills Regional High School 25 Keelson Dr in Rockport, Tickets are on sale at HAV II in Camden and the Camden-Rockport Middle School office. $8 per ticket, children under five are free.

Here is the video of The Chris Wolf Show: