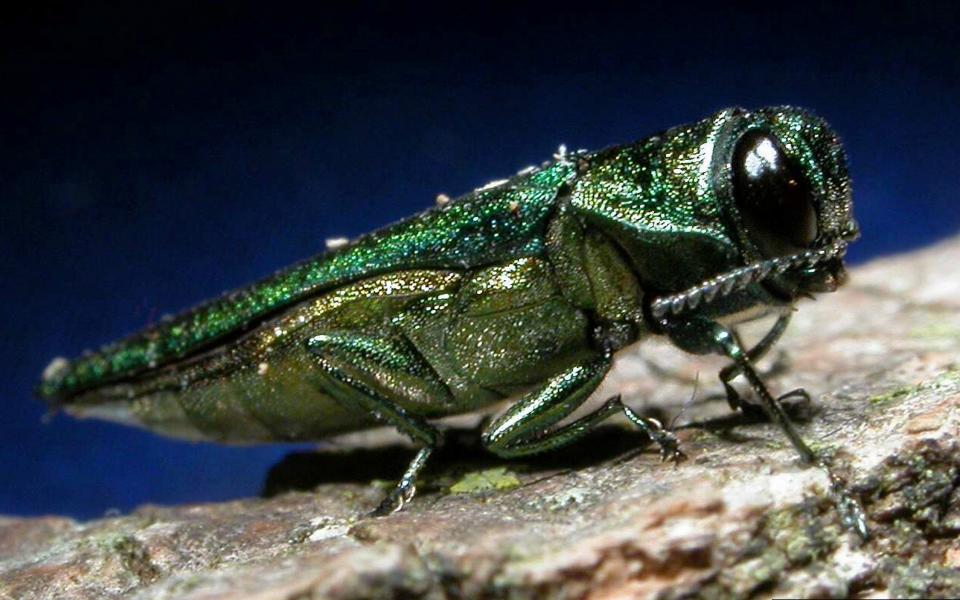 Maine communities stand to lose a lot with the arrival of emerald ash borer (EAB), an Asian parasite that attacks white, green and brown ash (Fraxinus spp.) — killing most trees within a few years. Camden, Maine, who received state Project Canopy funding to calculate EAB’s potential impact, found that tree removal and treatment would total a quarter-million dollars, roughly a third of its annual budget.

That figure did not account for less readily quantifiable losses: the ash tree’s aesthetic value and presence in familiar landscapes; its integral role in Wabanaki culture and traditions; its capacity to absorb and store atmospheric carbon and reduce stormwater runoff; or its ecological contributions – supporting, among other wildlife, roughly 150 species of moths and butterflies.

Since 2002, when EAB first appeared in Michigan (transported in on shipping pallets), it has devastated ash populations in numerous states. Many foresters consider the infestation a slow-motion natural disaster.

Few Preparations for This Disaster

EAB reached Maine in 2018 and was discovered in Portland last fall. On Jan. 22, the Maine Department of Agriculture, Conservation and Forestry (DACF) proposed extending the quarantine area for EAB to all of Cumberland County and the five southernmost towns in Oxford County.

So few towns have full-time arborists that the Maine Chapter of the Society of Municipal Arborists is “not really active as an association,” notes Kyle Rosenberg, city arborist in Bath.

Beyond DACF and the University of Maine Cooperative Extension, towns have limited options for EAB guidance. Eric Conrad, director of communication and educational services at the Maine Municipal Association, says his organization has shared EAB information with members but has no staff with scientific expertise. Nor is the Maine Association of Conservation Commissions helping towns with this concern, according to its president, Fred Snow.

The Maine Forest Service strongly recommends that every municipality begin preparing for EAB by completing an inventory identifying the ash trees in municipal rights-of-way that could endanger public safety. As ash trees die, they grow brittle and unstable, making them a significant hazard.

Statewide, ash species constitute about 4 percent of Maine’s hardwoods but represent a higher portion of the tree stock in some town and city centers.

Given its high concentration of ash trees, Camden received encouragement and funding from Project Canopy in 2017 to complete a survey of ash trees on municipal land and rights of way in its town center, and to develop an EAB response plan. That survey and plan, which identified 452 ash trees, required 400 hours on the part of a full-time summer intern. She got extensive support from two skilled volunteers (an arborist and a naturalist) who had completed the grant proposal that funded her position.

Every one of Maine’s nearly 500 municipalities should complete a similar survey and plan, but it’s hard to imagine that many could muster that effort. “Towns lack the capacity to be proactive about tree issues,” notes Jan Ames Santerre, who runs Project Canopy for the Maine Forest Service (at DACF).

Roger Rittmaster, one of the volunteers who led the Camden effort, suggests that other towns extrapolate from its plan – particularly the budget, which is “recent enough to give approximations” for expected tree removal and treatment costs.

At a minimum, other communities could try to implement key recommendations from Camden’s response plan: create a tree reserve account now in anticipation of EAB and other insect outbreaks, and begin educating community members about the inevitable need to take down ash – saving only select “specimen trees” through treatment.

With tree removal cost estimates ranging from around $25 to $40 per inch of diameter (measured 4.5 feet off the ground), many municipalities will face six-figure costs over just a few years. Once trees begin dying, prompt removal is essential to minimize hazards.

The loss of ash will transform the appearance of many downtown areas, depriving communities of the shade, carbon storage and wildlife benefits those trees now provide. Anticipating that loss, municipalities should be planting a diversity of trees now.

Here again, though, expenses can be prohibitive (with the contracted installation of larger nursery stock costing up to $1,000 per tree). Few municipalities have staff members with the experience or capacity to do the planting themselves.

What municipalities and homeowners need is a steady supply of new tree whips, affordable bareroot stock that can be widely planted. Currently, towns can acquire bareroot stock at a few spring sales (like those of the Fedco Cooperative and Knox-Lincoln Soil and Water Conservation District), but Maine lacks a resource like the Northwest Oregon Restoration Partnership, a native plant cooperative that supplies more than 75,000 regionally acclimated and affordable plants each year. Maine could use a nursery on that scale to meet the need for replacement trees.

Communities may be able to save a few select specimen ash trees by hiring licensed pesticide applicators to do trunk injections (typically every two years until the EAB threat passes). With applications by trained professionals, there are “not many concerns with ash and ash flowers in terms of pollinators,” in Fish’s estimation. (And one organic tree-injection treatment is available.)

A far higher risk to beneficial insects can occur, Fish says, when homeowners attempt DIY treatments around the roots of their trees. (The state’s EAB page has detailed guidance on pesticide considerations.)

DACF employees are working hard to inform towns about EAB threats and potential responses, but are burdened with increasing demands – given that Maine also faces outbreaks of browntail moth, winter moth, gypsy moth and hemlock wooly adelgid. While wanting to offer forward-looking guidance, staff are often caught in crisis-response mode.

With more resources, DACF could provide technical help with ash tree inventories (it is currently limited to assisting just two communities each year). It could also establish a streamlined grant process so that more towns with demonstrated need could remove tree hazards and treat significant trees.

Sadly, the threat posed by EAB is not anomalous. Maine’s ecosystems face growing risks of catastrophic disruption, given the changing climate and the global transport of insect species.

The state can do little to stop the invasion of species like EAB. But it can do a lot more than it is now to mobilize a constructive response.