Together, to the compassionate end. 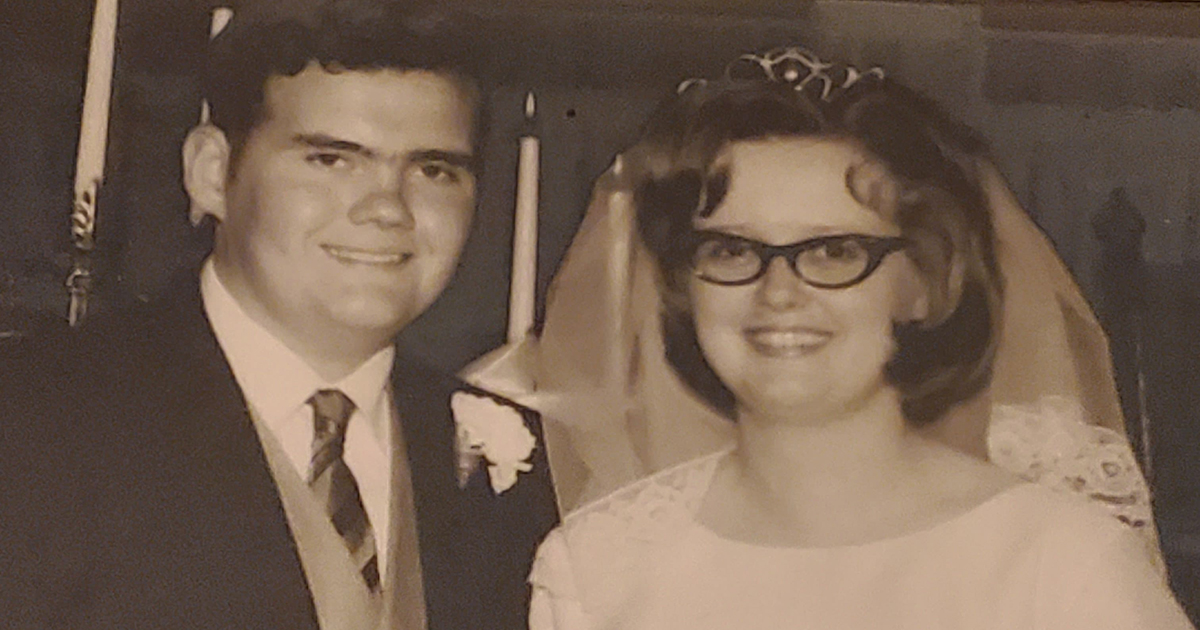 A pastor and his wife, both suffering from COVID-19, were together through the final moments of a half-century marriage because of the efforts of a loving doctor and a do-what-it-takes Houlton hospital.

By Barbara Walsh, The Maine Monitor—

He had bouts of fever and chills.

“I couldn’t shake it, and it continued through Thanksgiving Day,” said Blevins, minister of the Stetson United Methodist Church.

Earlier that week, the 71-year-old pastor learned others were sick in his small northern Penobscot County town of Patten.

“I got a COVID test on Friday and tested negative,” Blevins said. “I was thinking everything was OK.”

Then Blevins learned one of his church members had tested positive and was hospitalized. Though the minister stopped in-person services for several months in the beginning of the pandemic, he reopened the church in early August, following masking and social-distancing guidelines.

On Saturday, Nov. 21, the church’s Facebook page alerted its congregation that the  Sunday in-person service was canceled.

“We have learned this evening that one (church) member has tested positive, is hospitalized and several members are now quarantined. There has been a surge of positive test results here in Patten. Please continue to pray for the end of this pandemic. God bless you and keep you safe.”

On Sunday morning as his wife Carol Lynn fell ill with a sore throat and chills, Blevins sat at his dining room table live streaming the church service on Facebook. With a glass of orange juice nearby and a painting of Jesus hanging on the wall behind him, he spoke in a solemn voice, updating his congregants in the town of 1,000 people. He urged them to pray for those who were sick in his church and community.

“Lift up all those who are dealing with this COVID-19 epidemic throughout this world. This week we’ve had a first-hand experience of how quickly it can spread.”

Despite a Maine Center for Disease Control and Prevention investigation into the church outbreak, Blevins reassured his congregants that the infections did not begin at Stetson Memorial, where seven members would ultimately get sick.

“The church has done a remarkable job, I think, in following protocol and keeping folks safe all these months … but sadly, those who attended in-person worship Sunday, those who helped with pies on Monday and those who volunteered with the food pantry have been exposed.”

As the minister explained that everyone should get tested and quarantine, his wife of 52 years grew feverish with aches and chills. She also had trouble breathing.

Members of the Patten church prayed for the woman who preferred to be called by her middle name Lynn and was well-loved in the community.

Monday, Nov. 30, as her oxygen level dropped below 90, Blevins, a former EMT, followed the advice of his family doctor. He helped his wife into the car and drove to the nearest hospital in Houlton, about 30 miles away. Pastor Dan Blevins keeps a vigil for his wife Lynn in the parking lot of Houlton Regional Hospital, where she was being treated for COVID-19. Photos courtesy of Robin Bickford.

Unable to go inside, Blevins sat in the parking lot, waiting as a doctor evaluated his wife. He was soon joined by his daughter Robin Bickford, who lives in Houlton with her family.

Bickford worried about her mother, who had diabetes and other health problems, including scarred lungs from a severe bout of pneumonia that nearly ended her life eight years ago. Bickford also was concerned about her dad, who has a weak heart.

Though Bickford wanted to comfort her dad, she remained in her car. The 42-year-old woman suffered with her own complications, a genetic disease that destroyed her lungs. Hoping for a double-lung transplant, she could not risk infection from the virus.

Outside in the darkened parking lot, the two of them sat in their cars praying and hollering back and forth. When the hospital confirmed that Lynn Blevins had tested positive for COVID-19 and was admitted, her husband and daughter went home and continued to pray.

Over the next few days, Blevins’ condition worsened. Despite the COVID-fighting drugs and machines that pumped air into her lungs, her oxygen levels continued to plummet.

Dr. Jennifer Cavalari kept in touch with the family, updating them. At one point she told Bickford, “I’m not sure she’s going to pull through this.”

The doctor kept a careful watch over Lynn Blevins. Calvalari had grown to love working in the 25-bed facility where staff treated each other and their patients as family. She was also proud of the quality care the small rural hospital provided the community. But she knew Blevins had few options left. If she needed to be ventilated, the hospital would have to transport her to a larger medical facility for care. Lynn and Dan Blevins were high school sweethearts who met in a 4-H club. Photo courtesy of Robin Bickford.

While his wife’s condition worsened, Pastor Blevins fought a rising fever and also struggled to breathe. Three days after his wife was admitted, Blevins – a former police officer and fire chief – drove himself to the hospital. After testing positive for COVID-19, he was admitted.

The couple who had met in a 4-H club and were high school sweethearts lay in beds across the hall from each other. Machines in each of their rooms hissed as oxygen flowed into their lungs.

“Dad is stable on O2, very weak but hanging in there,” Bickford wrote in a Facebook update to her friends. “Mom had another very rough night … Thank you all for your prayers, & please keep them coming.”

The Houlton hospital that had only admitted one COVID-positive patient since March now had six on its ward. Despite working long hours, treating multiple patients with the virus, Cavalari could not bear to see the Blevins apart.

“How could she get them together?” she wondered.

All of the COVID rooms were singles and too small. Yet at the end of the hall, there was a larger room that could accommodate them. Like many doctors, Cavalari struggled to watch news accounts about COVID patients dying alone in hospital rooms without the touch or comfort of family. She did not want that to happen to Lynn Blevins, especially when her husband was just 20 feet away.

“As a doctor, you don’t want people to be dying alone; it’s overwhelming and scary,” Cavalari said. “You want people to be together. That’s one of the most important things we can give to a patient at the end of their life.”

Cavalari was determined to give this gift to Lynn Blevins and her husband. Expecting a bit of red tape, Cavalari called the hospital administrator to share her idea. The top official agreed that placing the couple in a room together was a top priority. Within hours, plans began to install a negative air pressure system into the larger room to suck air and germs from the space, reducing virus transmission.

Once he received the request, Bart Peters, the hospital’s maintenance manager, and his crew got to work. Peters had worked at the hospital for 36 years. He loved its homelike feel, and enjoyed knowing most of the staff and patients who came through the door.

“Most everyone here, you either know them or their family or you’re related to them,” he said.

Peters and his co-workers worked nonstop to get the room ready for the Blevins.

“If this was my parent or my aunt or uncle,” Peters said, “I’d want somebody doing this for them.”

That Saturday evening, hospital nurses wheeled Dan and Lynn Blevins’ beds into the newly created COVID suite. The couple held hands for several hours and prayed. During their 52 years of marriage, they rarely spent time apart. They raised a family with two children in Maryland, and later moved to Maine, where they enjoyed hunting, fishing and serving God together. Dan and Lynn Blevins held hands for several hours after staff at the Houlton Regional Hospital installed a negative air pressure system to allow the COVID patients to be in the same room. The high school sweethearts were married for 52 years. Photo courtesy of Robin Bickford.

As her husband lay beside her throughout the night, Lynn Blevins rallied and improved. Her family clung to hope. Tears welled up in Cavalari’s eyes as she checked her patients’ vitals.

“It was the most beautiful and most difficult thing to see because you were so grateful to have them together, to have them supporting each other,” the doctor said. “But just knowing that after almost  53 years of marriage, they don’t know if she is going to make it through the night.”

Sunday morning, Dan Blevins got out of bed to help his wife have breakfast. He pulled the dining table over her bed.

“She reached for the orange juice,” Blevins said. “And then she was gone.”

Blevins called for help and stood as Cavalari and nurses resuscitated his wife.

Cavalari intubated Blevins and connected her to a ventilator as she had requested, only to have her heart stop beating again.

The hospital staff revived her once more while her husband prayed. As a snowstorm swirled outside, Cavalari requested a Life Flight helicopter to transport Blevin to Eastern Maine Medical Center in Bangor.

A former EMT, Blevins knew his wife had little chance of surviving.

Unable to fly in the blinding snow and wind gusts, Life Flight sent an ambulance to transport Blevins.

Bickford raced to the hospital to say goodbye to her mother.

She stood in the ambulance bay, took one final picture of her mother and told her, “I love you.”

Before the ambulance left Houlton that Sunday afternoon, Blevins died.

A few days later, Pastor Blevins was released from the hospital. Back home and on oxygen, he is heartbroken but also grateful.

“The hospital gave us our last night,” he said. “It made all the difference in the world. It was one of the most compassionate things I’ve ever witnessed.”

Blevins also knows his wife did not suffer in her final moments. He knows she died peacefully and in the comfort of his presence.

“It was an extraordinary gift,” the minister said. “She didn’t have to die alone.”