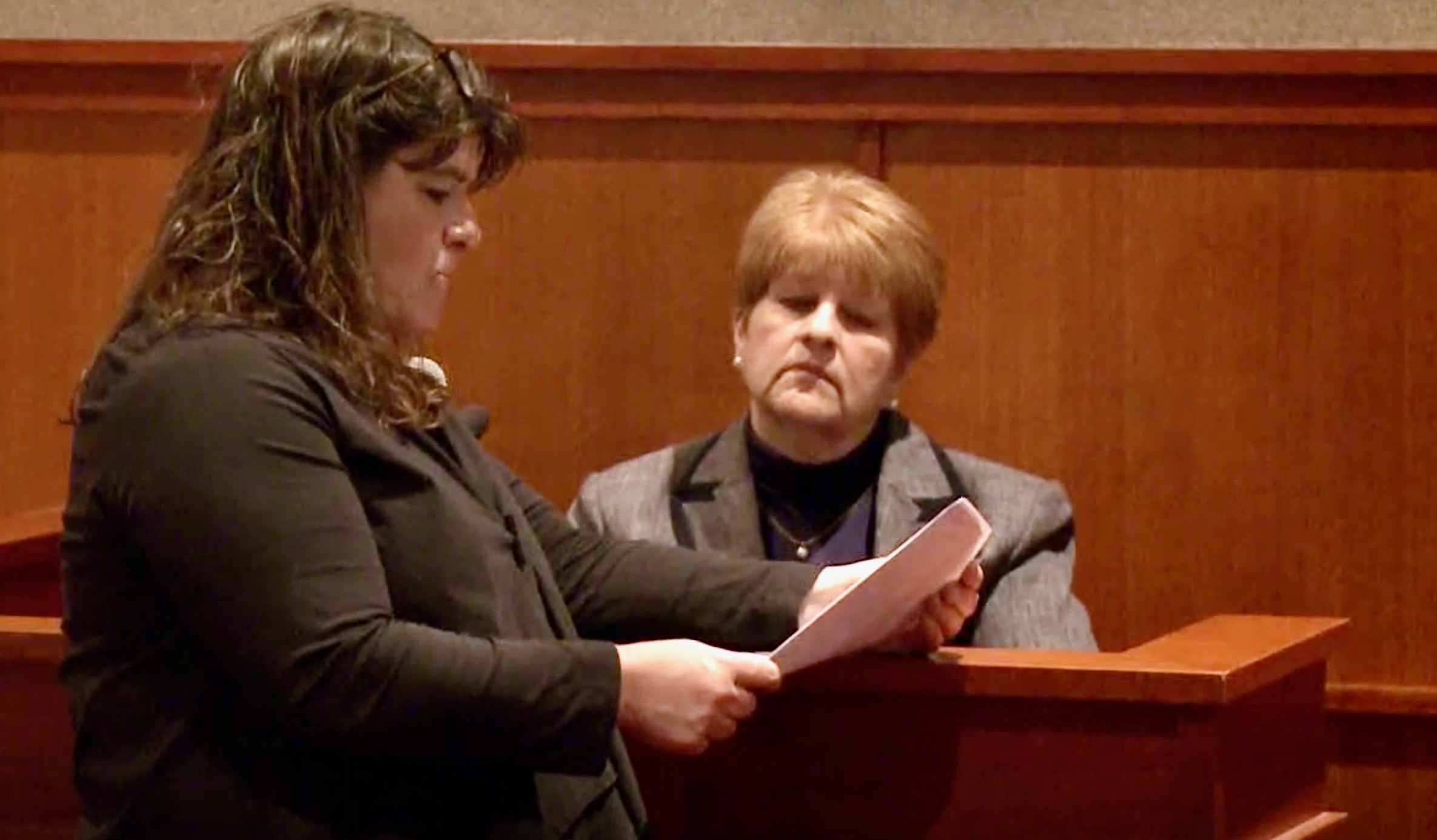 Amy Fairfield, seen here interviewing a witness during Anthony Sanborn’s 2017 post-conviction review case, has been sued by the Maine Attorney General for misrepresenting the hours lawyers worked on cases to earn a higher reimbursement from the state. Photo courtesy of News Center Maine.

Amy Fairfield, who was the center of a Maine Monitor investigation in 2019 about abnormally high billing by her law firm, is being sued by state officials for misrepresenting the hours lawyers worked on cases to earn a higher reimbursement from the state.

Since January 2016, Fairfield & Associates was paid $6.8 million by the Maine Commission on Indigent Legal Services, or MCILS, to represent adult and juvenile defendants accused of crimes who couldn’t afford to hire their own attorney. Fairfield requested to withdraw from an estimated 200 cases in July, after the commission suspended her for failing to participate in an investigation of her law firm’s billing practices, The Maine Monitor previously reported.

A civil complaint filed in Kennebec County Superior Court on Dec. 2 alleges her law firm Fairfield & Associates, based in Lyman, engaged in unjust enrichment and conversion of state funds.

The complaint also alleges Fairfield made negligent misrepresentations to MCILS about the “time spent by non-attorneys” on cases and invoiced the state for their work at the attorney reimbursement rate of $60 an hour. Work by paralegal and support staff is not covered by MCILS unless it is pre-approved at the discretion of the executive director, according to the agency’s rules.

The state alleges Fairfield failed to show reasonable care about the accuracy of her law firm’s invoices, and knew, or should have known, the invoices overstated the time actually spent by attorneys, who had worked on court-appointed cases, according to the complaint.

The state’s allegations are unfounded, said Ted Dilworth of Dow’s Law Office in Norway on behalf of Fairfield. Dilworth said it was a conflict for the attorney general’s office to be seeking information about criminal defendants represented by Fairfield & Associates while the agency has open cases against the firm.

“We just think this is the attorney general’s office going after her,” Dilworth said.

Unique among states, Maine has no public defenders and instead contracts with private attorneys to provide legal counsel to people who cannot afford it. State lawmakers increased the budget and added new staff positions to improve oversight by the agency this year on the heels of joint investigations by The Maine Monitor and ProPublica, which showed the agency was financially mismanaged and worked with attorneys who had histories of professional and criminal misconduct.

Commissioner Mike Carey said the agency received complaints and information that required it to pursue legal action against Fairfield and her law firm.

The commission voted 5-1 on Nov. 29 in support of the Office of the Maine Attorney General filing a civil lawsuit on its behalf. Bob Cummins was the one commissioner to oppose the recommendation.

Fairfield was once the highest paid public defense attorney in Maine. She billed the state $275,612 in fiscal year 2018 for work on court-appointed cases, which the former executive director of MCILS John Pelletier said he knew included work by multiple people at her law firm, The Maine Monitor reported in November 2019.

Pelletier reportedly investigated Fairfield’s billing practices in 2018, but he ultimately didn’t take action against her.

“We fully cooperated at that time. We did everything that John Pelletier asked,” Dilworth said. “He found that there was no problem.”

A government oversight report later found Pelletier did not go far enough to find out if attorneys had properly billed the state. Pelletier resigned at the end of 2020 following press and government scrutiny of his job.