For the sake of the horse: Wendy Harvey talks with Chris Wolf. WATCH NOW. 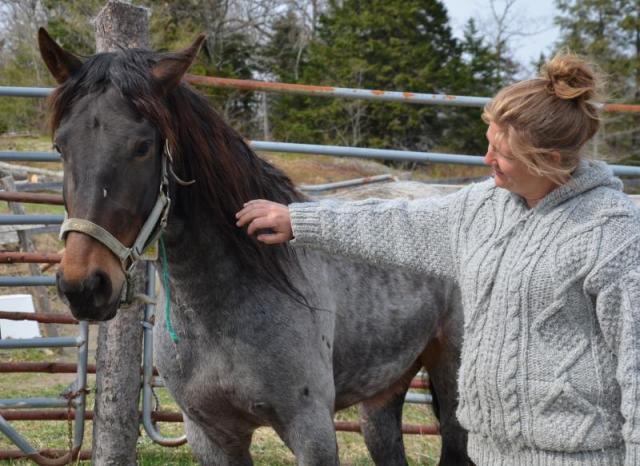 Wendy Harvey, of Hope, is no stranger to the plight of the American Mustang. She spent most of last winter and spring gentling and training a wild roan mustang from the Wyoming plains. It was all part of the Extreme Mustang Makeovers, a nationwide effort to raise awareness of America’s wild horses and find them homes, as their grazing territory continues to shrink.

By August, Freedom, the traumatized mustang, had blossomed under Harvey’s quiet and persistent touch. At the Extreme Makeover competition in Massachusetts, Harvey took Freedom to 10th place in a contest that inspires the best in horse trainers.

Freedom came back to her new home in Hope, and by Thanksgiving, she was one of the herd at Equine Connections, where Harvey boards and trains horses, and teaches people not only horsemanship, but how to build healthier relationships between humans and equines. “I am devoted to the business of helping horses,” she said.

She is particular concerned about the American Mustang, whose habitat has shrunk, as the industries of oil, gas and cattle have driven those wild horses into the violent round-ups. Those wild horses are pushed in captivity in order to get them off open land. Some perish in those round-ups. Many get trucked to slaughter houses in Mexico for money. Others spend the rest of their days in cramped, substandard corrals.

A few, very few, like Freedom, find the grace of humans such as Harvey.

On this Chris Wolf Show, you’ll be able to hear Wendy tell about her interaction with the horse as well as seeing pictures and videos of her training.