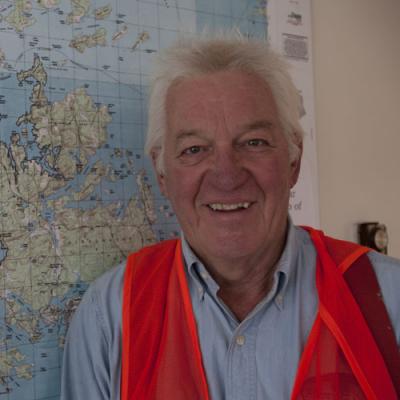 On The Chris Wolf Show for Wednesday, December 8, 2015, our guest was Phil Crossman, notoriously of Vinalhaven, Maine.

Frank Sinatra sings “I’ve been a puppet, a pauper, a pirate, a poet, a pawn and a king”. Phil seems to have lead a similarly charmed life, being an entrepreneur, a raconteur, an author, a musician, a thespian, storyteller, humorist, historian and pundit.

A recent article in the Island Institute’s Working Waterfront describes Phil’s life as full of challenges:

“He is suspicious, for example, of joining in his neighbors’ friendly croquet games, certain he is “fodder.” He describes his wife Elaine, an artist and gallery owner, tolerating his own aesthetic limitations. He is impatient with inefficient, nonsensical government policies and practices. He—a veteran—passionately opposes senseless war, and as a volunteer and sometimes town official, passionately supports community services for those in need of help.

He suffers poor quality beer on the island, rigged duck races, vandalism, trash along the roads and beaches, and a lack of interest in elected offices, but celebrates the high caliber of local theater and music (including that of his a cappella group, Phil ‘n’ the Blanks), the occasional martini tasting, and those who work to preserve the island’s beauty.

Some recent writing resulted from a challenge he gave himself: to circumambulate Vinalhaven’s coastal edge, walking around the island at low tide in stretches over the course of a few years.“

Phil as written two books, “Away Happens” and recently “Observations: A Maine Island, a Century of Newsletters and the Stories Found Between the Lines”.