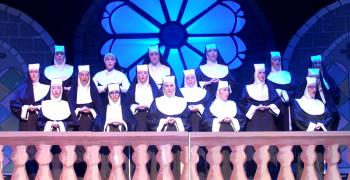 The nuns from Camden Hills Regional High School and other cast members will be the guests Wednesday on The Chris Wolf Show. The hugely successful musical “Sister Act,” opened last weekend at the Strom Auditorium and will continue through this weekend.

Our guests will talk about the production, their roles and the time it take to out on a successful musical. Directed by CHRHS Choral Director Kim Murphy, the musical lives up to the fine reputation the high school has built over the years for quality productions.

The show will be broadcast live at 8 a.m. on WRFR Community Radio at 93.3 FM, Maine Coast TV at Channel 7 on Time Warner, BCTV channel 2, in Belfast and also on the web at mainecoast.tv/streaming and wrfr.org. The Chris Wolf Show is broadcast Mondays, Wednesdays and Fridays with news from penbaypilot.com.