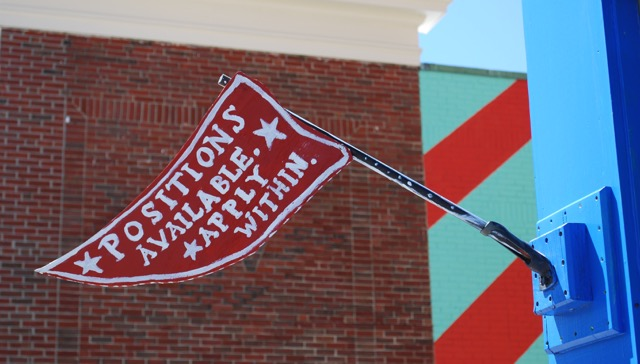 How can it be? Jobs are disappearing overseas, computers and robots are taking over, and yet we have a labor shortage here in Rockland? It’s strange, but apparently true.

Partly it is our seasonal economy. According to Gordon Page, Executive Director of Rockland Main Street, half or more of the jobs offered were summer jobs. Setting that special problem aside for another discussion, it remains that there are many full-time year-round jobs going unfilled.

Dave Grima at the Maine Department of Labor’s Rockland Career Center, notes that Maine is experiencing its lowest unemployment since 1976. The latest figures (March) for Knox County show 4%, down from 4.8% a year earlier. “The Career Center is very quiet these days,” Grima says, noting that he is seeing more employers, and fewer job seekers. The labor shortage is “a bit of a crimp” on growth, he says.

The tension between labor and capital is at the core of civilization, so we are not in uncharted territory. For most of recorded history, the great majority of people lived in slavery, serfdom, debt bondage, or other form of servitude. When North America was colonized, the great southern landowners, unable to harness a servile peasantry as they could back in England, took African slaves. The European peasants who came to America wanted to be free on their own land.

So is it a bad thing if labor is in demand? This must surely cause wages to rise. If we were experiencing a Spring of unprecedented high unemployment levels, would that be a good thing for business? Is unemployment higher than 4% to be desired?

The answer to these questions may depend on who you are. There are those of us who are capitalists and those who are workers, and also quite a few of us who are mixed. People who own their home and are self employed are both lords and labor. And people who own their home, have no debt, and work for others are in a different position from those who must rent and have debt.

Rockland, like many communities, is regularly trying to attract capital here by offering tax exemptions, land deals, and to-order zoning. Perhaps now we should be thinking about ways to attract labor.

Rockland’s rental housing shortage is having the opposite effect, it seems clear, but what other factors may be causing our labor shortage? Glen Mills of Maine’s Center for Workforce Research and Information in Augusta concludes from statistical analysis that the principal causes are decreasing workforce participation, due mainly to an aging population, and an economy that is growing again after some years of recession.

No doubt there are other factors at work too. One may be that young adults today are less attracted to the jobs that are available, less driven by consumer desires, and willing to sacrifice material success for the freedom to spend their lives doing something they enjoy doing, something creative and fulfilling.

Even the summer jobs traditionally taken by high school and college students may seem less attractive now. “They are not going to make beds at the Samoset,” says Gordon Page. Perhaps those computers and robots can help. Ifwe can develop self-driving cars, self-making beds may not be too far behind.

Our local labor shortage, and all of the above questions and more, will be the subject of the Rockland Metro show on WRFR this Wednesday from 5 to 6 pm. Calls will be taken at 593-0013, Following the show there will be a round-table supper hosted by WRFR. To join the studio discussion, or reserve a place at the table, email robert@thebuzz.me

WRFR broadcasts on 93.3 fm Rockland and 99.3 fm Camden, and streams online at WRFR.org. The Buzz is available online at thebuzz.me. To offer to write an issue, contact joe@interhuman.org or 596-0731.