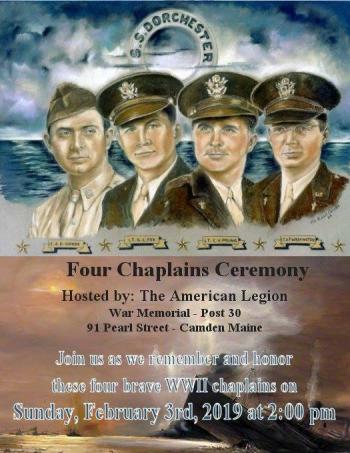 On Sunday, Feb. 3 at 2:00 p.m., The American Legion Post 30 will be hosting the annual “Four Chaplains Sunday” ceremony. On the Friday, February 1, 2019 Chris Show, we will be joined by Dave Franclemont, Jeff Sukeforth and Frank Carr to let us know what this ceremony is all about.

At the ceremony, American Legion District 6 Chaplain, Rev. Dave Franclemont, will be recounting the story of four World War II chaplains on board the U.S.A.T. Dorchester.

In February 1943, they courageously sacrificed their own lives to save many more after the Army transport ship they were riding on with 900 other soldiers and ship’s crew was torpedoed by a German U-boat while en route to a U.S. base in Greenland.

On Sunday, February 3, 2019, join the members of War Memorial Post 30, located at 91 Pearl Street in Camden, for this dedication to the self-sacrifice and heroic actions of these four Army chaplains.

WATCH the Chris Wolf Show live Monday morning, 8:00-9:00 a.m. on Spectrum Channel 1301 in Knox County, on your mobile devices and computers and smart TV’s at www.MaineCoast.tv, or on the ROKU “Maine Coast TV” Channel.