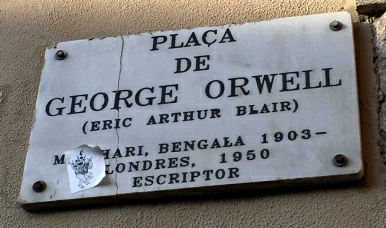 The city of Barcelona was founded just this side of the year zero by the Romans. It was a good place to retire old soldiers of the Roman Legion. Great climate and a short sail to Rome.

Eighty three years ago an English writer named George Orwell (Animal Farm, 1984) was in the city. He had that sense of adventure that infects many mostly young writers. In that year of 1937 if you wanted adventure and cared about politics, Spain and in particular Barcelona was a magnet. He thought he’d write for newspapers about the civil war Spain was falling into.

The protagonists were, on the left, the new Spanish Republic attempting to tear down the old order. On the right, the church, the nobility, land owners – the people who had always been in control in Spain. An enterprising young army officer named Francisco Franco took up the right’s cause and with units of the army moved to overthrow the government. Hitler and Mussolini helped Franco. Moscow encouraged the left. The Spanish civil war is often called a rehearsal for WWII.

The left had no army. It had a collection of peasants and volunteers from outside the country. When Orwell arrived in Barcelona in December of 1937 he encountered a city in revolutionary fervor. Half a dozen organizations, Communists of several flavors and anarchists were attempting to arm themselves to defend the Republic. Orwell joined one of these groups, the POUM, the Workers’ Party of Marxist Unification, a group opposed to Stalin’s vision of a Communist state.

Orwell thus went from being an observer to being an active participant – he served six months on the front lines of the war. His brief military career ended when he was injured and returned to Barcelona. He recorded his experiences in a book called, “An Homage to Catalonia”. In the book he describes fighting in the city. The amazing thing is all the buildings and streets and places are still there

The city recognized Orwell’s visit by naming a plaza after him. The Ramblas is Barcelona’s iconic and pedestrian friendly avenue. In “Homage” Orwell describes dodging bullets and hiding in buildings along the Ramblas. The POUM HQis now a hotel. He describes the nearly empty food market, the “Boqueria” which is still there, but now not so empty. I ‘ll be staying not far from that market for the first two weeks of December.

I’ve visited Barcelona several times. I was first there half a century ago. That was before I’d paid much attention to George Orwell. The streets he described are physically the same but the mood is very different. Instead of factions of leftists fighting each other there are tourists, many, many, tourists. Twenty million a year. now, long after Orwell’s time there is still anger in Barcelona’s streets. Many in Catalonia want independence from Spain. The recent arrest and conviction of the Provence’s government for sedition touched off massive protests. The highway from France was briefly shut down. The airport was nearly closed by tens of thousands of protesters. Dumpsters burned around Plaza Catalonia blocks from where I’ll be staying. That plaza marks one end of the Ramblas. At the other, at the port, is a statue of Christopher Columbus, hand outstretched toward the new world.

History connects people across time just as streets and roads connect places. History’s links connecting ages in the life of Catalonia’s capital are many. The Spanish civil war ended in Barcelona. There and then the Spanish Republic ended and four decades of dictatorship began. Like rust, history never sleeps.

Next month I will stand on the Ramblas and think of Orwell dodging bullets. If the current unrest flares up again I might be dodging tear gas canisters.

Glen Birbeck is a regular contributor to The Buzz, We hope soon to have his report from Catalonia.

To see this and other stories from this issue of The Buzz, Click Here.