Thomaston lobsterman Noah Ames gives away hundreds of pounds of lobsters to those in need every Christmas. 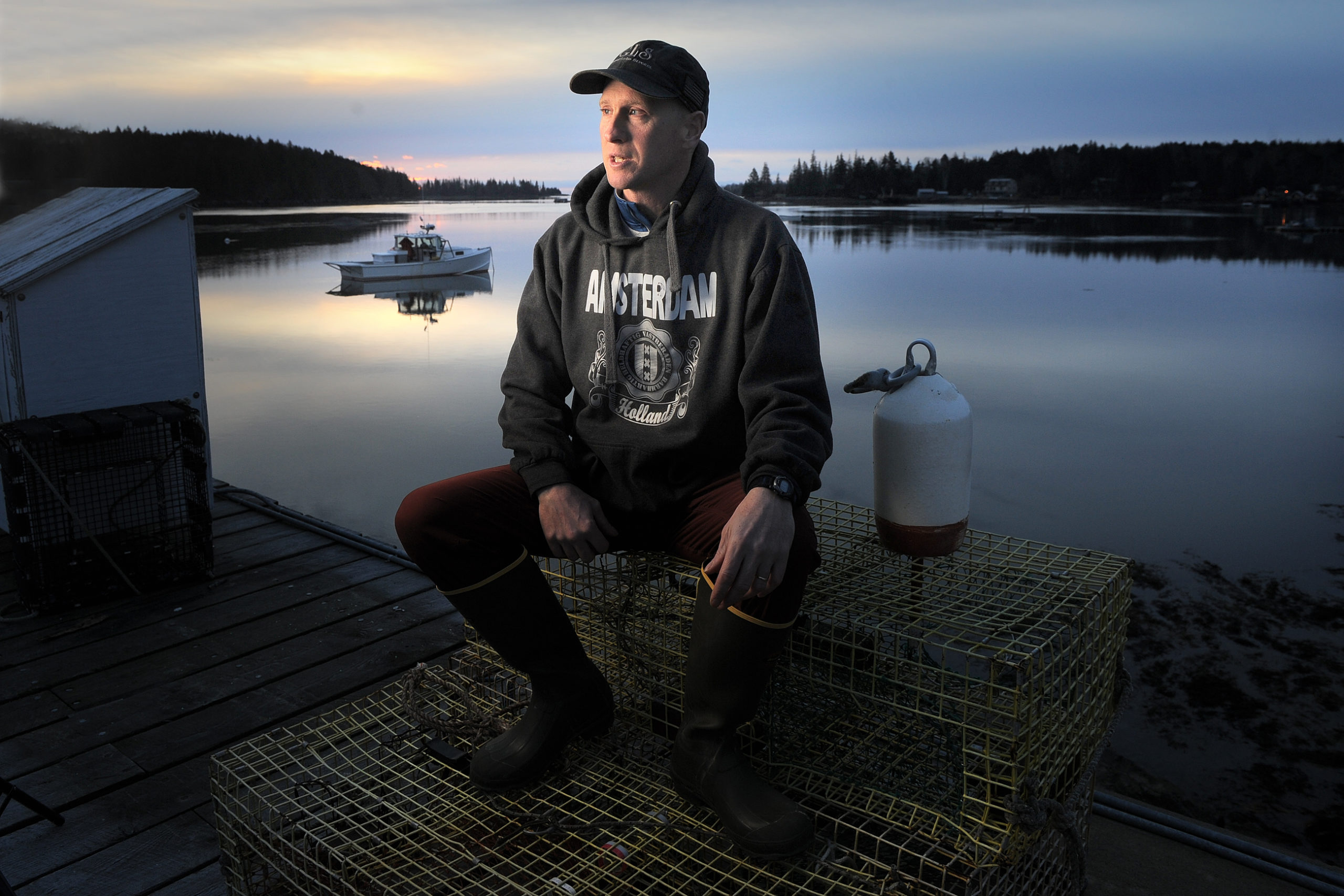 By Barbara Walsh, The Maine Monitor —

The gray-haired ladies smile and tell their stories.

“I can’t believe I’m going to have lobsters on Christmas!” they exclaim.

The veterans dig out their wallets, wanting to prove they served their country before taking home anything for free.

The homeless and those who have lost their jobs cry, thankful for the stranger that gives them a bag full of lobsters.

For the past six years, lobsterman Noah Ames has parked his truck at a local Thomaston business and given away lobsters on Christmas Eve to families and people in need.

In an early December Facebook post, Ames reminded his friends and fellow fishermen of the event that begins at noon on Dec. 24 at Midcoast Marine on Route 1.

“The family and I will be giving away lobsters again this year for families in need,” Ames wrote. “All are welcome no questions asked, military personnel and families thank you, and please come get some lobsters. This has been a trying year for most, so let’s spread some happiness. Merry Christmas.”

Ames’ Facebook post about the lobster giveaway was shared 1,500 times by people throughout the country. Local lobstermen and businesses donated 600 pounds of lobsters. Ames himself will contribute 100 pounds.

People in the community and throughout Maine also wanted to help. Ames suggested they donate Hannaford gift cards. He ended up collecting $400 worth.

“I’ll save those cards for people that really look like they could use something extra,” Ames said.

Lobstermen are the heart and soul of America. The men donating lobsters for the giveaway are some of the best people on earth. They’re guys that work hard and take care of their families. They’re awesome human beings.”

The 45-year-old lobsterman was surprised at the outpouring of generosity this year.

“This has become a community project,” said Ames. “It’s taken on a whole new level.”

Ames started the tradition to teach his children the meaning of Christmas.

“I just wanted to instill in them that it’s cool to give back,” Ames said.

The first year, he gave away 100 pounds of lobsters he caught off his boat, the Jennifer V., named after his wife.

A 13th generation fisherman, Ames grew up on the rugged island of Matinicus. He later moved to Rockland and started his own family. He hauls lobsters year-round, and is certain there’s no better profession or people to work with.

“Lobstermen are the heart and soul of America,” Ames said. “The men donating lobsters for the giveaway are some of the best people on earth. They’re guys that work hard and take care of their families. They’re awesome human beings.”

The fishing industry, like many other jobs, suffered this spring as COVID-19 crept into Maine, shuttering restaurants and decreasing the demand for the state’s iconic crustacean.

“We lost tens of thousands in the spring, when we were trying to sell lobsters ourselves,” said Ames of his fellow fishermen. “We were getting half the price of what we would usually get for them.”

But things improved in the summer, and Ames considers himself fortunate.

“I’m lucky to have a job,” he said. “If you drive through Rockland, Camden and Thomaston, there are so many businesses closed. It’s heartbreaking. Those businesses were someone’s heart and soul, and now they’re just gone.” Noah Ames takes a skiff out to his lobster boat in Tenant’s Harbor. The Thomaston lobsterman gives away hundreds of pounds of lobsters to those in need every Christmas. Photo by Fred J. Field.

In recovery and sober for the past 10 years, Ames knows what it’s like to be in a dark place. He’s grateful for the people who helped turn his life around.

“I’ve had some awesome human beings that helped me tremendously, and now I just try to do my part,” he said.

Over 100 Facebook members commented on Ames’ generosity and goodwill.

“In a year of so much suffering and discord, your good deed shines like a star in the night,” one woman posted. “God bless you and your family.”

I’ve had some awesome human beings that helped me tremendously, and now I just try to do my part.”

With the pandemic and thousands of Mainers out of work, Ames expects he will get a good crowd this year. He knows some people have a hard time taking handouts so he encourages others, “if you know somebody that needs help, come get some lobsters for them.”

In past years, people have shown up expecting a hidden fee or charge.

“What do you mean these lobsters are free?” they ask Ames.

“Just take them,” the lobsterman says. “Have a special Christmas dinner.”

Like they have done for the past several years, Ames’ children will join him this Christmas Eve, handing out lobsters to strangers and neighbors.

Thirteen-year-old Nadia is eager to help her dad and see the smiles on hundreds of faces.

“I’m proud of him for doing this,” she said.

Ames’ son Jack was 15 when his father began the holiday tradition. He is 21 now and hopes the free lobsters can take away someone’s hardship, even for one night.

“People might be alone or sad this holiday,” he explained, “and this can bring light into their lives.”

As the sky darkens on Christmas Eve and the last lobster is handed out, Ames will go home with his children and reflect on the day. He will remember the faces of people, young and old, who drove away smiling, crying and grateful.

“It makes my Christmas pretty special,” he said.

Just imagine what a great world it might be if each of us were an angel in some special way? That could be the best gift we might ever give.