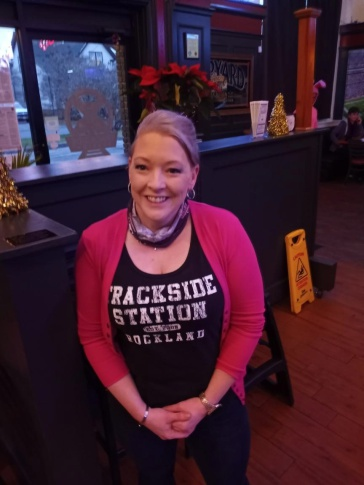 By Philip C. Groce, The Buzz—

It was not easy for Channa, in her early 20’ s, to lose both her mother and father to illnesses, and also to have her twin sister severely injured in a car accident. Channa Putansu (then, Munroe) had a premonition of her sister’ s accident, and when she did not show up for breakfast, Channa knew what had happened—common with twins. Historically, when Channa was much younger, her parents had started Bilbo Baggins in Camden.

Channa was working at a restaurant in Camden doing food service. She refused to be dragged down by the tragedies. She had been working hard, doing restaurant work since her last two years in high school, and even before that. But once she was working full-time, her school work went adrift. She graduated after 4 years from Camden High. Earlier in her high school career, she was truly interested in school work and planned to graduate a year early. Not to happen. The aroma of working full-time was greater than that of school work.

Channa learned to take things as they come, relying on herself . . . and her peer group… in restaurant work, as that is a small world. Even though there is much moving around to different restaurant jobs, restaurants not being known for longevity, the same faces keep showing up. Not an especially easy job, especially when the fists and drinks start flying when grudges surface with the local fishermen. Not really a problem now, but dicier the further you go back.

After working with Todd Putansu for ten years at both the Navigator, where she bartended, and later at the Tradewinds in Rockland, they married. They have two children, 3 and 5 . Channa now works for Trackside Station Restaurant, and Todd for Myrtle Street Pub. Todd’ s parents live next door to them and thankfully help with the children.

Covid has gutted the food service industry in Rockland. “Right now, Todd and I aren’t getting more than 3 -4 shifts a week, ” Channa says. “We live frugally, and we had some savings, but that’ s getting thin. We have more time with the kids—one in school–and that’ s good. Having fewer customers and with constant cleaning and all the sanitary issues, it takes time and holds me away from having more time with the customers, but I try. The customers have to have a bit more patience.”

What do you like most in your work? “I’ve always liked bartending the most, the fast-paced, quick conversations, and as bartenders, we end up learning j ust about all the back-stories with the people in town. Helps to know your customers. Makes you tolerant. Everyone has problems. No hierarchies here. I’m doing more table work, since bartending is slower right now—too few seats. Masks cover the face except the eyes, and it is harder to communicate if people don’ t see facial expressions—especially with older people; because they have learned to read facial expressions so well, and many of them have hearing problems.

“People need some courage even to get out, even though here it’ s as safe as it gets. Couldn’ t be any worse than the grocery store—probably safer here, especially with this being a high- ceiling old train station. We haven’t had any problems. Kelly Woods, the manager out front, has an office, and she is compulsive about getting everything right and safe. She keeps a smooth background, keeps us in the bubble. And Mike Woods, the owner, in the back—the kitchen—is up at 4 am prepping, doing some of the cooking. He’s also the maintenance person, electrician, whatever needs to be fixed.
“We take the name of a contact person and telephone number when guests come in. Most of them j ust want to get out, have someone serve them, joke around a bit, have some good food. It’ s not expensive, but when you are running out of money, everything is expensive. Have to put up with no tips sometimes. Can’t get angry.”

How are tips handled? “We pool our tips. I like that way best. We all work, and some days you get more tips than others, depending on the customers. Best to let everyone share. Our basic salary goes up by 50 cents every year. It’s now at $6.50.”

What do you like the least in work? “ The computer, especially the complicated programs. Some of them are easier to work with than others, but they tend to take some of the fun out of work. ” I wondered if computers have sucked fun from just about every workplace, no matter the type.
I remarked that she brings much enjoyment to many people in her work. “Yes, people enj oy being served, ” she replied, “and we all have learned, let’s say, how to entertain, read people, know what they like. But, we’re genuine. It’s a time away from work and home. ” I told her that she and her husband, Todd–because I have seen him work at Myrtle Street—they both are professionals, and that makes a difference. “Yes, that’s a nice way to look at it. ” Her smile realized, even with the mask.
I told her about one of my interviewees who spent time in southern Sicily, and she said that anyone who does their work very well gets the most respect in the culture, no matter how much or how little the person earns. That’ s professionalism. “In here, we feel that we are professionals, ” she replied, “but we don’ t put it that way. It’s just that we know what we are doing, and we are ready for what comes along, whatever. Bringing enjoyment to people is an important part of life—really important now.

“It’ s hard at times, but it’ s a life. For Todd and me, it IS a life, and we can make it. Even with all that is going on right now, there’ s a place for us to have a life and do the work we do, have a family, have happiness. Never know, maybe someday we can have our own place.”