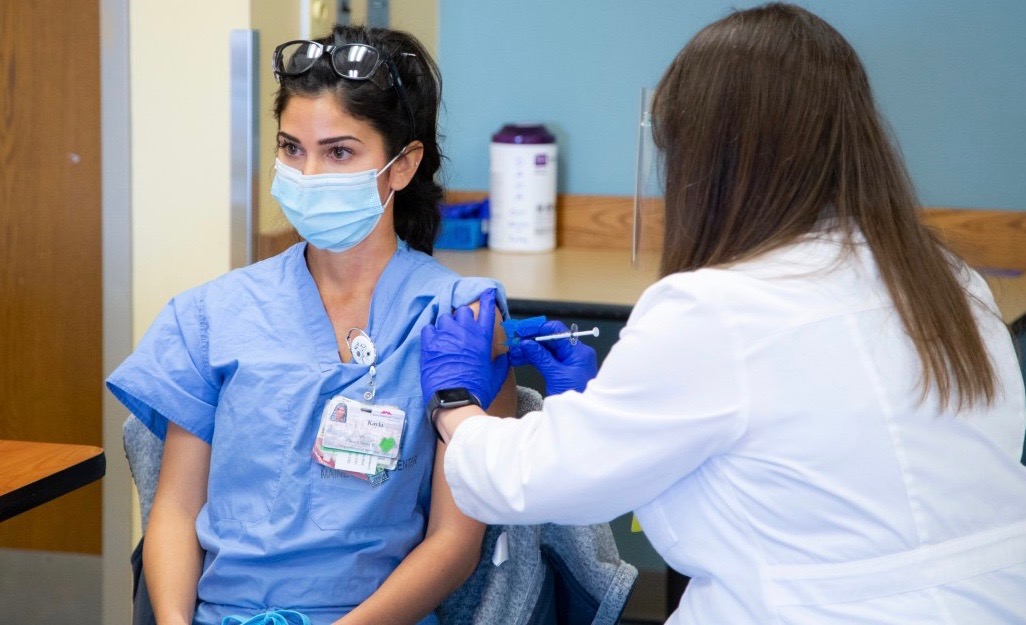 By Rose Lundy — The Maine Monitor

State CDC director warns it’s a “matter of time” before the variant strain of COVID-19 is detected in Maine.

More people in Maine now have been vaccinated for COVID-19 than have had the virus.

About 46,600 Mainers were vaccinated as of Friday, according to the Maine Center for Disease Control and Prevention. That represents nearly 3.5 percent of the state’s population. At least 3,271 of those vaccinated have received their second dose.

In comparison, 28,400 Mainers have had confirmed or probable cases of COVID-19, as of Friday. More than 1,100 have been hospitalized and 426 have died.

Thursday was the country’s deadliest day yet with more than 4,000 deaths and Dr. Anthony Fauci, the nation’s leading infectious disease expert, predicted it will get worse before it gets better. On Friday, 41 COVID-19 deaths were reported in Maine  — the state’s highest daily death toll. However, they didn’t all occur in one day. Six of the 41 people died in the previous 48 hours. The remaining 35 died between Dec. 2-28 and were found to be associated with COVID-19 after the Maine CDC reviewed death certificates.

According to Bloomberg’s data, which had Maine at about 42,000 vaccinations, only three states had a higher percentage of the population vaccinated. Maine had a slightly different ranking according to the U.S. CDC, which found it had the eighth highest vaccination rate Friday.

Maine still is in Phase 1a of its vaccine rollout, which focuses on health care workers. Dr. Nirav Shah, the Maine CDC director, said it’s likely this phase will last through the month. By February, the goal is to vaccinate all health care personnel and long-term care residents. The next phases include frontline essential workers, people with high-risk medical conditions and older people.

Kevin Miller with the Portland Press Herald reported on Dec. 28 that physicians and health care providers who aren’t connected to large hospital systems felt left out of the initial vaccination rollout despite working in high-risk settings. Shah has said during recent press briefings that the Maine CDC is starting to expand the circle of who can receive vaccines, but efforts have been hindered by smaller than anticipated vaccine allocations two weeks in a row.

As of its most recent allocation, Maine has distributed 81,850 COVID-19 vaccine doses among 84 different hospitals, facilities and programs. (See below for a list of locations where vaccines have been distributed.

For the week of Jan. 11, the Maine CDC expects to receive 17,175 doses, which is only 100 doses more than it received last week. Of those doses, 8,775 are expected to be doses of the Pfizer vaccine and 8,400 doses of the Moderna vaccine.

Maine is working on a pre-registration program for vaccines that could include an online tool to sign up for shots as a way to speed up the process and eliminate long lines. The agency has not yet announced when the system will launch.

Public health officials say those who have been vaccinated should continue to wear masks, social distance and avoid gatherings. The vaccine has been found to reduce the symptoms of COVID-19, but it’s unclear whether it prevents the spread of the virus. Also, experts recommend the vaccine for those who have had COVID-19. Answers to additional frequently asked questions can be found here.

On Jan. 4, Shah said he was concerned about a new variant strain of COVID-19 that has been detected in multiple countries and at least seven states. All viruses mutate, he said. “That’s just what viruses do.” But this new strain is notable because it seems more contagious, spreading faster than the current strain. That means the risk of being infected after getting exposed to someone with the virus is higher with this new strain. And those who are infected are more likely to infect others.

But those infected with the new strain don’t seem to become more ill than those with the current strain and it’s likely that the current vaccines still will be “highly effective against this new strain, although that needs to be monitored,” Shah said.

Experts are searching for the variant in Maine but it hasn’t been detected, Shah said, although it’s likely only a matter of time.

“This new strain spreads the same way as other current COVID-19 strains. It’s just better at spreading,” Shah said. “But the tools that we have used thus far — face masks and physical distancing — are just as effective at preventing infection by this new strain and given how much more quickly it seems to spread, those tools are more important now than they’ve ever been. No virus can make you sick if it can’t get to you in the first place.”

Ultimately, a vaccine will be the best defense, Shah said, but it can’t be the only defense. There are at least three additional vaccines that are under development or review, Shah said during a later press briefing. They include one from a partnership between AstraZeneca and Oxford University, one from biotech company Novavax and a third from Johnson & Johnson in partnership with Janssen, which only requires one dose. Janssen is a pharmaceutical company that Johnson & Johnson owns.

Also during his first press briefing of 2021, Shah looked back at numbers that represent what the Maine CDC accomplished during the pandemic: