Where is this swab Going? 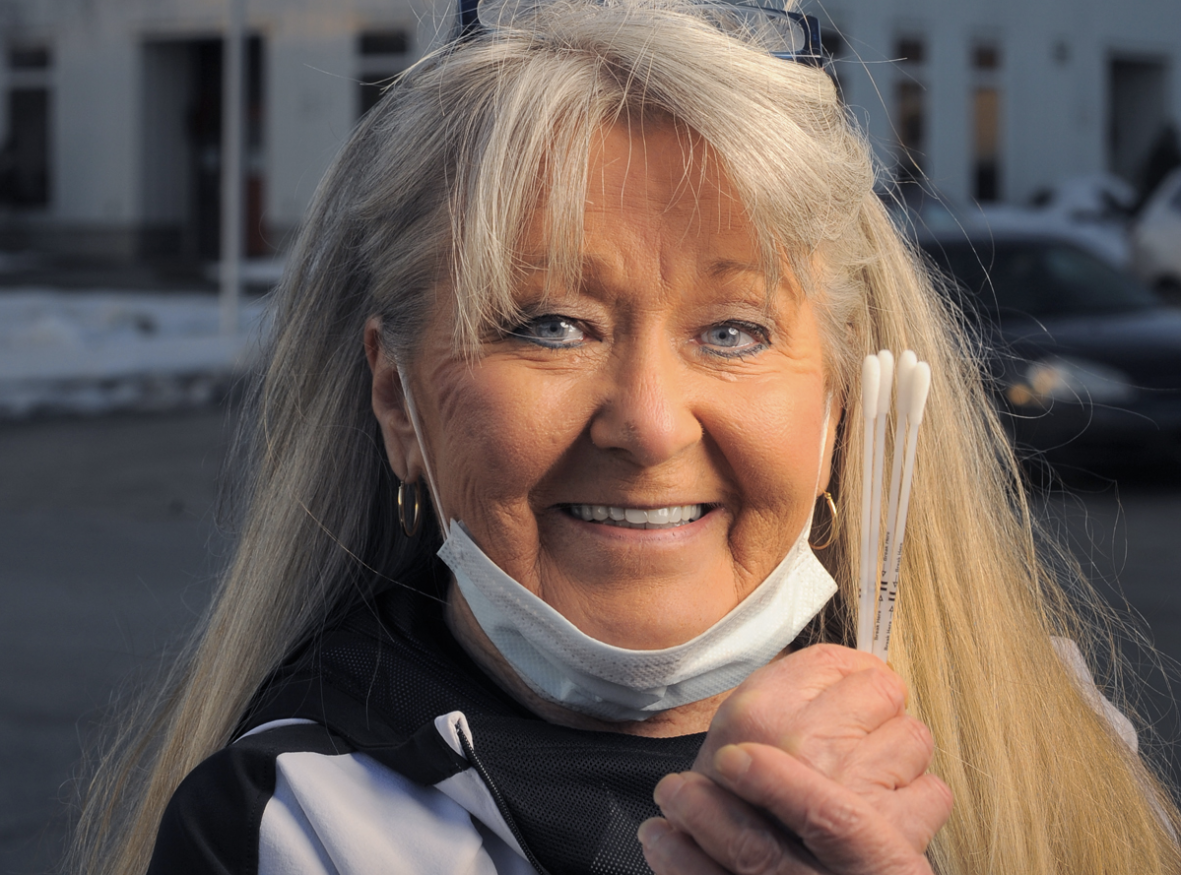 By Barbara A. Walsh, The Maine Monitor —

As she drops the cotton swabs between the tiny teeth on the conveyor belt chain, Irene Chase cannot help but wonder, “Where is this one going today?”

Chase is a sterile wrap operator at Puritan Medical Products in Guilford. Since March, the 68-year-old employee has often worked 10-hour days, six days a week. Despite the long hours, she never tires of the job or forgets how important each swab is.

“You take a look at everything going on in the world and how serious this (pandemic) is,” Chase said. “You hope that the swab can get to a person before they infect someone. You feel like you are saving lives.”

Founded as a toothpick maker 100 years ago, Puritan is one of only two companies in the world that manufactures the special nasopharyngeal swabs required for COVID testing.

As the pandemic swept across the United States, top health officials asked Guilford’s owners to ramp up production of the desperately needed swabs.

By early summer, the company was producing 20 million swabs a month, and after opening a new Pittsfield plant with an additional 400 employees, the company increased production to 65 million.

The daughter of a military dad, Irene Chase grew up in Dover-Foxcroft, where she learned to work at an early age and appreciate a good-paying job.

“I started picking strawberries when I was 11 at 10 cents a quart, and I haven’t stopped working since,” Chase said.

In March, when Puritan’s co-owner Timothy Templet told his 500 employees he needed them to step up and do as much as possible to make swabs and stop the pandemic, Chase was ready.

“It was overwhelming at first,” Chase said. “He said the government needed millions of swabs as fast as we could make them.”

An identical twin known for her laughter and love of Disney character Cruella DeVille, Chase started getting up at 2:30 a.m. daily to work her 10-hour shift. Each shift, she and her sterile wrapping partner box up about 37,000 swabs.

“She’s a dedicated, dedicated essential worker,” said her sister, Earlene Hartford. “She takes pride in her work and the people she works with. They’ve worked their butts off since the day they were asked to step up.”

By the time Chase gets home to the house she shares with her sister, she’s dog tired. A couple hours later, she’s in bed, sometimes at 5:30 p.m. and never later than 7, resting up for the 2:30 a.m. alarm.

“Sometimes I’m so tired I lie down with my facemask around my chin,” Chase said.

Around Dover-Foxcroft, a town with a rich mill history, workers like Chase are considered heroes, her sister said.

“Everybody is proud of them,” Earlene Chase added. “People that worked in mills, you know they don’t get recognized. It took COVID to see how important they are.”

Chase is also careful about going out around town. As well as fearing for her health, she doesn’t want to miss a day of work. You take a look at everything going on in the world and how serious this (pandemic) is. You hope that the swab can get to a person before they infect someone. You feel like you are saving lives.”

‘“If I get sick, that’s one less employee Puritan Medical has at their facility,” she said. “And we’re needed. We’re needed badly up there.”

She also canceled her Christmas trip to Georgia to spend time with her son.

Along with the long hours, there are benefits to working at Puritan. The owners and supervisors often walk through the plant, talking to employees.

“They say thank you for coming in. You’re doing a great job. That means a lot to the co-workers.”

There are also financial incentives for working extra hours. Chase and other employees who put in 40 hours by the end of their shift Thursday get double-time for coming in Friday and triple-time for working Saturday.

“In those two days you can make as much as you do working 40 hours a week,” Chase said.

There is also a bit of fun on the weekend shifts, Chase said.

“We laugh; we sing songs, Christmas carols,” she said. “You have to lighten up. Sometimes some of us are so tired from working so many hours.”