Down Maine Street With Phil Groce: Giving Back 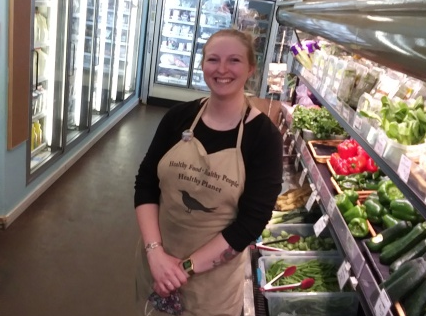 I generally interview the first person who speaks to me when I enter a business. Elissa Bower first spoke to me in the Good Tern Co-op, and she was standing by the sandwich counter. I thought she made the sandwiches, but come to find out, her hangout is the small office seen behind. She was so forthright, I felt welcomed.

Elissa has been with the Good Tern Co-operative (Co-op) on Main Street for over 4 years working through different jobs, starting at cashier, and where she is now the manager of the grocery, meat, and cheese departments. She’s also in charge of education programs and outreach for the Co-op. How did she develop her forthrightness?

“I was born in Camden and went through school there. My parents own the schooner, Heron, in Rockport.

They make their living by chartering in the Caribbean during the winter and up here during the summer. I was home-schooled, along with my younger sister on the boat down south, and I had the chance to be at close quarters with people from all over the world. Seeing and living the wild life, facing heavy weather and the ocean, I think I learned common sense then. Don’ t stand around and think about it. Just do something. You have to make quick decision on a schooner.”

Why not stay with that?

“Actually, I hated going back and forth, leaving my friends back home. I did spend, maybe a total of a year and half actually at Camden High school, but I graduated a year early, and then I was on my own.”

“I, and a partner, lived on a small farm, and we learned about natural food, gardening in general. What really interested me was permaculture. ”

“Making systems sustainable, like building soil, and in a larger context, biodynamic, which has a spiritual component. You call it stewardship. We have to be the stewards of the earth. Actually, I started learning that lesson when I was on the boat. It helped me through some hard times. ”

“As a teenager, there was so much going on, crazy times, often over-whelming. But just being able to see that on the earth it’s all fine. The world is NOT terrible. Watching something grow—seeds growing to fruition—is very cool, finding myself, centering, being able to see a bigger picture. That’s what attracted me to the Co -op. I was 8 . ” You skipped some years here. “No, I’ m only 23 , but I don’t mention that to anyone. Without thinking, people naturally discredit you in the very beginning if they think you’ re young. Lots of millennials feel that . . . prejudice. ”

“Yes, and I have spent time serving as interim general manager when the manager left. Luckily, the Co -op was able to hire new general managers after about five months. As the manager of grocery, meat, and cheese, I deal with over 5 0 local farmers and producers–all on the small side. We also get food from United Natural Foods, Inc. So, we have big and small deliveries coming in, like maybe $60 worth of eggs, and also pallets of large deliveries.

“I love dealing with all the producers personally, and seeing their work-sites. I feel as if I am giving back to the people of Maine for all their hard work in producing healthy beautiful food. It can be expensive. You have to pick and choose. I have been able to learn about cheeses—it’s so beautiful and sensual, and the hard work and dedication to produce something like that, bread, too. I’m in awe of what they do. ”

“I feel that the millennial generation–those in their 20’ s and 30’ s—are directing lots of their energy back to the earth and the local and organic movement, like back in the 70’s and 80’s when all the hippies came to Maine with their communes. My parents came to Maine then. Only today, this is more integral. Small farms are popping up. New greenhouses are extending the growing season, producing local greens and root vegetables all-year- round. I see innovative farmers growing hemp, rice, heritage grains, turmeric, ginger, saffron, and more. Maine IS leading the way, giving back, helping the climate. ”

What of the co -op business model?

“It’s a fantastic model, and it has to be governed by an involved board of directors, with financing coming from over 1500 members (at the Good Tern) who each pay $180 in equity to become member-owners. Most Co-ops re-distribute profit as dividends to their member-owners at the end of the year. Members-owners have a say in the organization, and they are eligible to vote on or run for the board. All co-ops are held to a set of values: self-help, self-responsibility, democracy, equality, equity, and solidarity. ”

What is your dream?

“In the interim general management position, I came into close contact with Columinate, an organization that offered consulting to the Co -op concerning its business model and operations. There was a very young woman in that organization, Brittany, from whom I learned. She was so brilliant and knowledgeable, started at the bottom, and now she teaches others. She’s my model.

“At some time, I am going to get a degree in cooperative systems. I think adding employee ownership to the co-operative model is the way of the future. But employee-owners have to be dedicated. There can’ t be much turn-over, and they have to be accountable. The staff has to remember that this is a business, and they are all in it together as owners.

“My dream is to learn how to build dreams in others, help people start co-ops in different forms as needed. It’s a fantastically flexible model, and it has a magnificent future. ”

I can see now, some young person in the future saying, “Yes, it was Elissa who really inspired me to do this. I wanted to be like her. Thank you, Elissa. ”