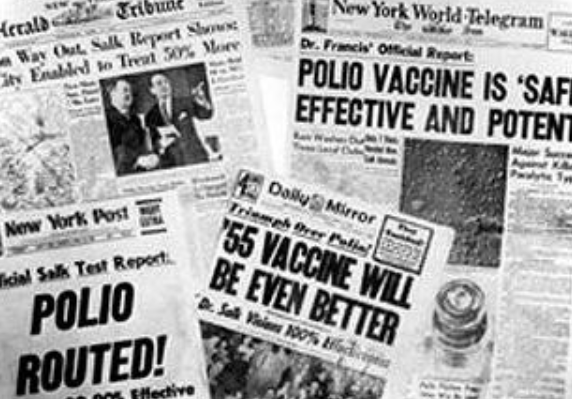 By Phillis Merriam, The Buzz

Next Sunday will be a day to celebrate those who worked who to eradicate polio, a virus that has killed or paralyzed millions worldwide. The only countries with contemporary polio endemics are Pakistan and Afghanistan. The Taliban agreed to re-start the Afghani polio vaccination of children under ﬁve on November 8. Ten million Afghan children under ﬁve need polio vaccines. I was lucky to have had minimal consequences from polio during the 1952 polio outbreak. I only had to wear ugly corrective shoes while my contemporaries were wearing fashionable penny loafers. I threw one shoe in the nearby river and told my mother I lost it. She must have known my plan but bought me penny loafers anyway. The worst part of having polio was the pounding headache, being held down by many medical staﬀ during a lumbar puncture and being isolated from my family in hospital for many weeks of rehabilitation. I did fully recover with no after eﬀects. Such was my luck compared to others left paralyzed. Anxious American parents rushed to line up their children to receive
the vaccine when it became available in 1955. I often think about those times when I read about the anti-Vaxxers of today and the polarization and politicization of vaccines that did not exist then, which saved millions of lives.

Meanwhile, 100 BIW workers are demonstrating in opposition to their employer’s Covid vaccine mandate. They say they’ll quit if BIW doesn’t cave to their demands.

I decided to go to Sandy Beach on this late October day that evolves into grey skies and rain with high winds that cause the few remaining pleasure boats in the harbor to seesaw on their moorings. Seagulls wind surf high over the ocean covered in white caps. The few dog walkers grip their hats from becoming airborne. The high winds lift my hair, giving me a free fright wig pre-Halloween.

Today Mother Nature is really angry. Her high winds sound like a freight train. We have no power to speak of – only one desk light that ﬂickers a bit. No power to the kitchen or the rest of the house. A sailboat has been ripped from its moorings and crashed ashore near Dick’s Beach. Needing my morning coﬀee to avoid a getting a no-caﬀeine-headache, I ventured to the South End Grocery that was fully functioning with plenty of coﬀee and breakfast sandwiches. Bless the South End Grocery! A South End shipyard employee was picking up coﬀee and ordering pizzas for his crew, who are trying to keep a ship from snapping its cables. The yard has no power. My need for coﬀee is so pathetically minor compared to the dangerous work the shipyard crew must undertake.