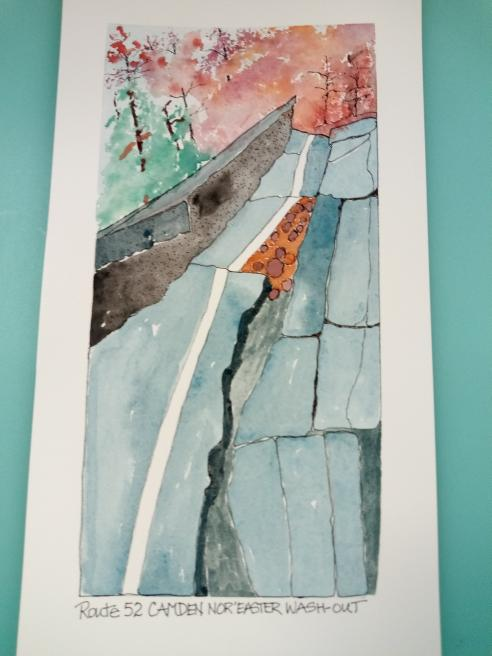 The season is turning with cooler, calmer and brighter weather after the nor’easter’s high winds beached some boats and left some households without power. The PenBay Pilot featured reporter Sarah Thompson’s excellent photos of beached boats on Sandy Beach and Dick’s Beach and their recoveries.

A second storm of high winds with seven inches of rain caused some power outages and ﬂooded basements. The Lindsey Brook neighborhood, which has long been neglected by Rockland’s public works department, was especially hit hard. (Check out reporter Steve Betts 2011 satirical Courier Gazette article about Lindsey Brook, the DEP and the IRS.)

While the rest of the country is seeing declines in Covid cases, Maine has the highest numbers since the pandemic started due to the unvaccinated, putting even more pressure on frontline medical staﬀ. My sympathies align with health care providers who have done so much for so many and sacriﬁced so much including their own health and lives treating the unvaccinated.

The global Covid death toll has now reached 5 million, which is thought to be an undercount. The 1918-1919 ﬂu pandemic claimed an estimated 20 to 100 million – the actual numbers will be never known. 675,000 were Americans. There were many mask mandates, mandated isolation of victims, school closures and bans on public gatherings. And no politicization of the ﬂu compared to Covid today.

Our local school board, like so many across the country, is being harassed by anti-Vaxxer-conspiracy-theorists opposed to school masking mandates to protect students and staﬀ. These people should just stay home and fulminate in private.

The Supremes will not block Maine’s vaccine mandate for health-care workers with religious objections. This is the third time SCOTUS has refused to step in regarding vaccine mandates. Maybe there is some light at the end of the Covid tunnel?

The Night Walker is back. His clever LED headgear with a blinking red light on the
rear makes for safe after dark strolls around the South End.

A woman pushing her pet dog in a baby buggy cooed over the catio feline inhabitants next door.

A skeleton astride a bike and waving to passersby is the best Halloween display.

An artist set up his easel for plein air painting wearing his watch cap and parka.

My circadian rhythm is confounded by the time change. Got up at ﬁve to have my ﬁrst morning coﬀee on the porch in the dark. I saw the Big Dipper balancing its handle on a neighbor’s roof.
The sliver of the new moon was like the free edge of a well-manicured ﬁngernail.