Headwinds at 20: As Downeaster nears a milestone birthday, questions arise about its future 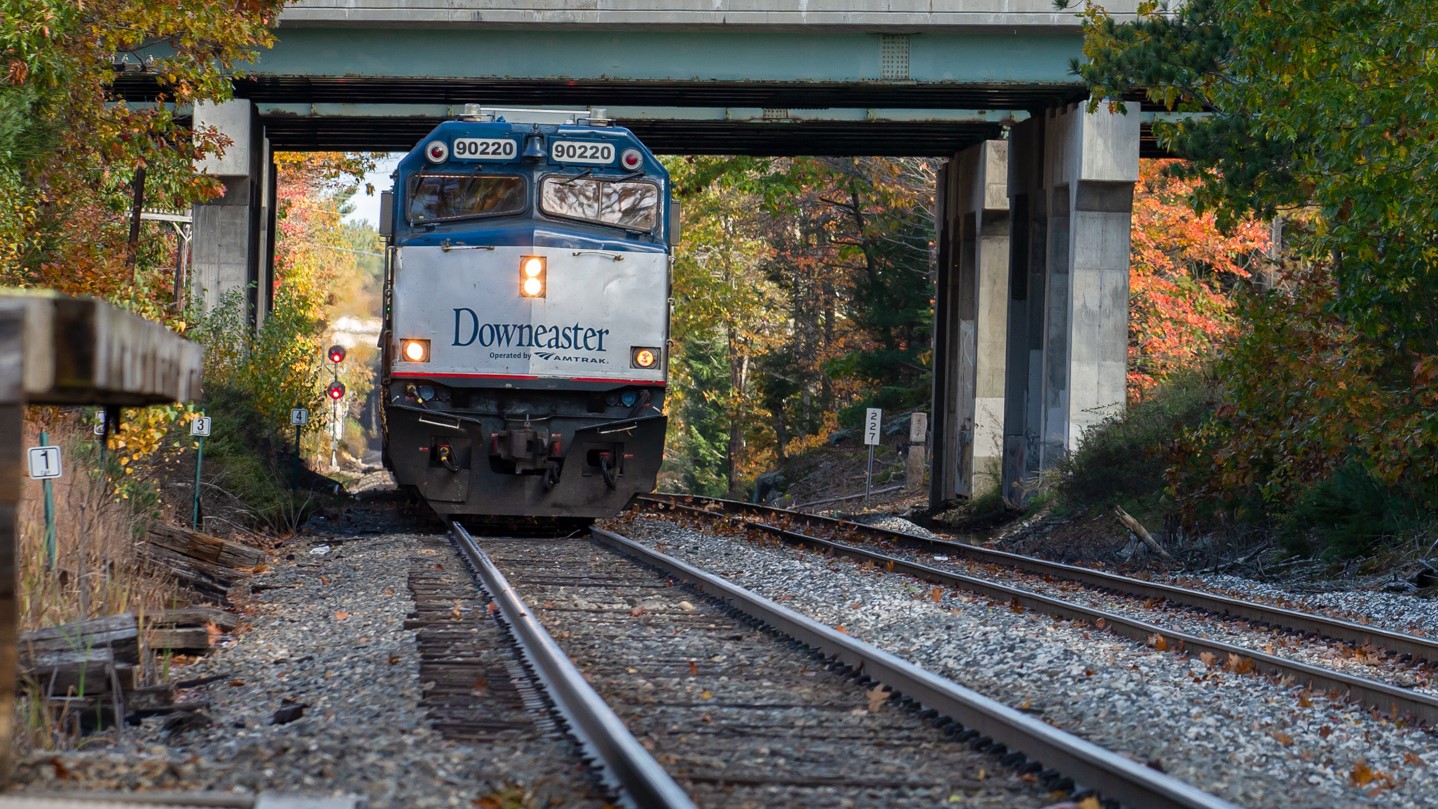 State Sen. Joe Baldacci wants it for Bangor, and 1,700 people at the “Bring the Downeaster to Bangor” Facebook page agree with him.

State Sen. Ben Chipman of Portland has had it in his city for years, and hopes to see it go well beyond.

Mayor Jay Coelho of Waterville says passenger rail service to his city of 18,000 — which is revitalizing already, without the Downeaster train — would “allow people to access our businesses to work and to shop, which would be incredible.”

In fact, it’s a near unicorn hunt in Maine public policy and state politics to find critics who question the wisdom of expanding the diesel train to Lewiston, Augusta, Rockland, Bangor — or 150 miles beyond that to Aroostook County.

Even the conservative Maine Policy Institute, which historically has criticized taxpayer-subsidized services, offered faint skepticism. “It’s really not an issue that we hear about from a lot of people,” Institute analyst Nick Murray said. He went on to say that finding future train passengers in northern Maine would be “tough.”

But a historic look at the Downeaster’s financial performance, and a COVID-induced workplace trend, make a case that tapping the brakes on the 20-year-old Amtrak Downeaster’s political momentum is worth considering.

Before the COVID-19 pandemic, from fiscal year 2009 to 2019, expenses to run the Downeaster grew by 61%, from $14.1 million in 2009 to $23.47 million 10 years later. Thanks to a passenger fare increase in 2017, revenues nearly kept pace, rising 55%, according to figures provided to The Maine Monitor by the Northern New England Passenger Rail Authority, which operates the Downeaster.

During the same 10-year period, actual ridership — the number of people using the train, which now stretches from Boston’s North Station to Brunswick — rose 34.4% (407,288 to 547,293), just over half of the growth rate of Downeaster expenses.

So as the Maine media regularly reported that the Downeaster set ridership records from 2010 to 2019 — which was true — operating costs were climbing much faster.

Looking ahead, the Downeaster’s forecast is one of uncertainty. That’s true for passenger trains and subways in general because COVID-19 caused cutbacks in the number of days that millions of Americans commute to a job or office. Many 2019 office jobs are now entirely remote.

Yet when the Downeaster rail service was born 20 years ago (Dec. 15, 2001), a well-publicized rationale was that York and Cumberland counties were becoming bedroom communities for high-tech and other office workers in places like Danvers and Waltham, Mass., and in Boston itself. Projected Maine commuting patterns were baked into the Downeaster cake. Quinn also acknowledged that most of the rebound was due to a strong 2021 summer tourist season and students returning to Maine colleges from Brunswick to Biddeford.

Casual, weekend ridership was up, Quinn told her board. Business and weekday numbers were not.

“This is a hunch as much as anything,” Quinn told the Monitor during a subsequent interview, “but we do expect that (commuting frequency) has changed. I think a five-day work week is a thing of the past.”

None of this is a surprise to Marc Joffe, a senior policy analyst for the Washington, D.C.-based Reason Foundation. Joffe is one of a few national experts to question the political momentum that passenger rail has amassed during the Biden administration, especially in rural areas such as northern California and Maine.

Joffe said the biggest hurdles facing passenger rail include a new, critical look at whether office workers need to commute on a daily basis; “green” competition from environmentally friendly hybrid and electric-powered passenger cars; and an old but still relevant fact that in many markets, traveling by bus is more convenient than trains for scheduling and drop-off locations.

As many Mainers know, you can’t get directly to Boston’s Logan Airport on the Downeaster, but you can by bus.

The rising anti-commuting sentiment among both employers and their workers may be passenger rail’s biggest threat. The trend affects much more than train service. “COVID has shown up and now everyone wants to work from home,” Joffe said. “No one is making a profit from people working from home. Well, maybe Zoom.”

The “green” argument that worked well for trains, subways and buses for decades is now equally questionable.

Joffe said trains that burn diesel fuel — as the Downeaster does — have a hard time making an environmental argument because people are buying hybrid and electric-powered vehicles, and U.S. automakers have pledged to stop making gasoline-powered vehicles by 2040 or sooner.

The Cato Institute, another D.C.-based think tank, has argued for years that passenger rail has a weak argument that it is environmentally friendly. It questions the Biden administration’s ambitious, $53 billion high-speed rail proposal by saying massive construction would be required.

“What they don’t say is that building high‐speed rail lines generates thousands of tons of greenhouse gases per mile, and it would take decades for any operational savings to recover that cost, and then only if the lines were heavily used. Such heavy use is unlikely in most corridors in the United States.”

Proposals to expand rail service in Maine do have the benefit of using existing freight-rail right of ways and state-owned lines, said Joffe. Although significant track upgrades would be needed, that is better expense-wise and environmentally than starting from scratch.

Still, no one disputes that rail upgrades are needed before the Downeaster line is extended, requiring tens of millions of dollars in state and federal tax money, and burning fossil fuels in the process.

Not how Maine leaders see it

Many Maine leaders are undeterred. They view passenger rail coming to their municipalities and legislative districts in local business terms.

They don’t look at Amtrak in general, or the Downeaster in Maine, as a service that should break even financially. The NNEPRA, which operates the Downeaster, is 45% supported by federal and state taxpayers. Most don’t question it environmentally. “The part of Maine that’s north of Augusta needs a new deal,” said Baldacci, the Bangor senator who wants to see the train run to Augusta, then Bangor and even as far north as Fort Kent. “Part of that green new deal involves passenger rail with higher technology” that could allow trains to reach 79 mph or more.

Baldacci supports several proposals to “study the feasibility” of extending the Downeaster’s run beyond Brunswick up the coast, and beyond Portland to Lewiston and Augusta.

Sen. Ned Claxton, a physician whose district would be served by a Portland-to-Lewiston extension, expressed skepticism. Claxton said studies in 2012 and 2018 found that passenger train volumes beyond Portland would be low. LD 991, a measure passed last session and signed by Gov. Janet Mills, asked for another look.

This time a consultant will also weigh the economic-development impact that train stations along the route could have on communities, and will assess the availability of federal funds to pay for an expansion. Improved freight service is another consideration, Claxton said.

The consultant will need six months to complete the work, and the state is still waiting for municipal matching funds to arrive before the study begins, said Paul Merrill, spokesman for the Maine Department of Transportation. That timing makes it iffy that the Legislature can receive the study and act on a Downeaster route extension before adjourning next year, although LD 991 included a March 1, 2022 deadline for the consultant’s work.

“There’s lot up in the air” about how many office employees will return to daily commutes in the future, he said. “We don’t know if it will be 40% or 80% of what it was.” Chipman, the Portland senator, said traffic congestion and highway safety should also be considered. The Portland area has seen unprecedented growth in real estate development, much of it in previously rural towns such as Windham, Standish, Gray and New Gloucester.

Chipman, unabashed in his desire to expand passenger rail, hopes that reductions in commuting are permanent because vehicle traffic on Route 302 through Portland and on Interstate 295 is bad. Accidents are up.

“There’s still going to be people who need to get to work,” Chipman said, citing hospital and hotel employees as examples. “The question is: How do we want them to get there?”

Quinn, the NNEPRA executive director, explained that the Downeaster is a “public service, not a business.” It started because Maine citizens pushed for it. Passenger rail in Maine was never built on a premise that it would be break even financially, she said.

It is true that operating costs were rising faster than ridership pre-COVID, but many of those costs were out of NNEPRA’s control, such as fuel and labor costs.

The COVID pandemic, as it did in so many aspects of our work and personal lives, changed everything.

“The whole situation, including for the Downeaster, was heartbreaking,” said Quinn.

Entering 2020, it appeared that the rail service would set another record and eclipse 600,000 riders that year. Instead, by mid-April the Downeaster was reduced to one run a day, prompting the authority board to suspend service entirely.

Then the federal CARES Act kicked in. The point of that legislation was to keep businesses and governments operating as close to normal as possible, and to keep as many people employed as possible. Amtrak nationally, and the Downeaster in Maine, responded. Vaccines came along, COVID restrictions eased and people started traveling again.

By May of this year, the train was up to five runs a day. Current passenger volumes, while still well below 2019 levels, are exceeding projections for 2021.

Environmentally, Quinn said Amtrak plans to replace its aging fleet of diesel locomotives with essentially hybrid ones within the next “five to seven to nine years.”

The new trains will run on diesel fuel in places like Maine, where tracks are not electrified, and on electricity where possible. Amtrak projects diesel emissions will be cut by 85% with the conversion.

In terms of future expansion, Quinn said her authority and its board don’t have enough data to know if that’s a good idea. The factors required in LD 991, which include station-centric economic impact, availability of federal funds and benefits to freight rail in the state, make sense, she said.