Keeping a culture alive, one drumbeat at a time 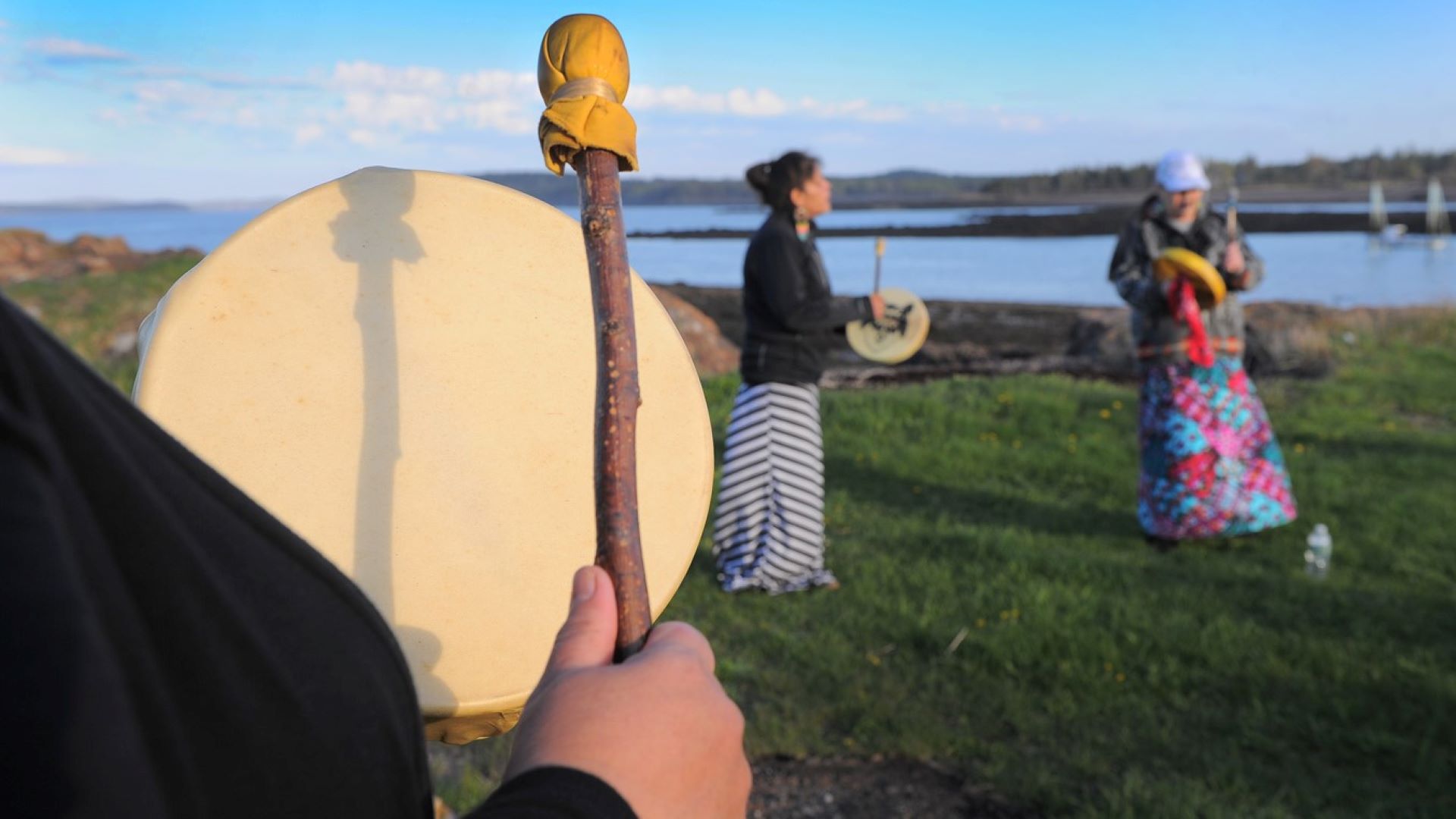 By Barbara A. Walsh

PLEASANT POINT — The drumbeat and the song called the elder back to her childhood.

Mildred Mitchell Yatroussis swayed to the music and remembered when her people were not allowed to speak their language or sing their songs.

The 96-year-old woman smiled as her Passamaquoddy tribe drummed outside her door. The Cipelahq Ehpicik — the Thunder Women — beat their drums, danced and sang to honor Yatroussis. The tribe’s oldest member, Yatroussis recently returned to Pleasant Point, a reservation tucked in the northeastern corner of Washington County.

“I wanted it to be a surprise to welcome her home,” said Deborah Newell, Yatroussis’ daughter. “My mother was born and raised here, and when you hear the drums, you just get a feeling of belonging.”

Yatroussis and many others on the reservation are grateful for the Cipelahq Ehpicik. The women gather each Sunday to preserve their culture and honor their ancestors. Their rhythmic drumbeats also help heal their community and themselves, explained drummer Holly Cleaves. The Passamaquoddies believe the drumbeat is the heartbeat of Mother Earth. Photos by Fred J. Field.

Pleasant Point, or Sipayik, is one of the two Passamaquoddy reservations in Maine with a combined population of 1,400, according to the 2020 census. The most eastern tribe in the country and the first to see the sun rise, the Passamaquoddy belong to the Wabanaki — “People of the Dawn.” Like other Native Americans, they believe their drums are living, breathing entities.

“The drumbeat is the heartbeat of our creator Mother Earth,” said Barbara Paul, who has drummed for 30 years on the reservation.

Paul is the keeper of the tribe’s sacred drum used in ceremonies and celebrations. She also teaches the Little Eagles, young Passamaquoddys, how to respect the communal drum and hear its rhythm. Barbara Paul created the Cipelahq Ehpicik drumming group after younger women on the reservation asked her to teach them the ancient ritual. Paul said the women drum as a form of healing. “When I sing it’s a form of prayer,” she added. Photo by Fred J. Field.

When a few of the tribe’s young women asked Paul to teach them the ancient practice of drumming, a group quickly evolved. Over the past two years, members have gathered outside on Sunday afternoons to minimize their risk of getting COVID-19.

About a half-dozen women come each week with their own hand drums. The youngest is 30 years old. Paul is the oldest at 67. Most wear the traditional Passamaquoddy ceremonial skirts made with colorful ribbons or material.

The Thunder Women have drummed outside the homes of people who are sick or dying. They have also sung and drummed at funerals. Tori Neptune is one of the younger members of the Cipelahq Ehpicik or Thunder Women drumming group. Photo by Fred J. Field.

“We sing with all our hearts,” Cleaves said. “We ask the Creator to attend and be beside the person who needs help, whether it is someone who is grieving or the person who is passing on.”

Sometimes the women drum at Split Rock, one of the reservation’s sacred sites where many tribal ceremonies are held.

A large boulder that was severed at its center, Split Rock sits on the edge of Passamaquoddy Bay. Along with its spiritual significance, it is a symbol of the tribe’s battle to preserve its land after the Passamaquoddies defeated attempts to build a liquified gas terminal on the site.

Like the tribe’s commitment to its natural resources, the drumming group hopes to preserve its culture for future generations. A 2008 tribal survey noted that only 10 percent of Passamaquoddies spoke their language fluently, compared to 70 percent 30 years ago.

“We’re fighting to keep our traditions alive,” said Lynn Mitchell, who taught Passamaquoddy culture and language to native and non-native students at Calais High prior to the pandemic. “For many years our people were not allowed to speak our language, not allowed to sing our songs or dance. Not allowed to look how they wanted to look.” Many members of the Cipelahq Ehpicik wear the traditional colorful skirts when they gather to drum. Photo by Fred J. Field.

When the Cipelahq Ehpicik gather, they honor the ancestors who were forced to suppress their culture, Mitchell said.

“They were made to feel less than,” Mitchell explained, her voice cracking with emotion. “The stability of who they were, their being, their souls were violated. When you think of what they went through, it makes us feel the pain in the intergenerational trauma; it trickles down.”

Drumming, Mitchell said, helps heal those wounds and reclaim their culture. The vibrations of the drums and repetitive chants of ancient songs resonate throughout the reservation. During one session, the group drummed outside a known drug dealer’s home. They later learned the rhythmic beat deterred a young man who intended to buy drugs that Sunday afternoon.

“The drum speaks to them; it calls to their inner spirit that has been taken over by these drugs,” said Cleaves. “We’re praying that they come back with that power.”

During the past year, the women say 12 Passamaquoddies have died of overdoses on Pleasant Point and its sister reservation, Indian Township. One was Paul’s daughter-in-law.

“We drum to let people know we are here to help,” Paul said. “Drugs have 100% affected this place. It used to be alcohol and marijuana, now it’s fentanyl and heroin.”

Paul’s daughter Marie understands how addiction can pull people into a place where they feel lost and hopeless. Once addicted to heroin and Oxycontin, Paul has been in recovery for 4 1/2 years. She considers drumming part of her self-care routine and sometimes talks about the ancient ritual at her weekly recovery group. Marie Paul looked to the sky while drumming with her fellow Passamaquoddy tribal members. Drumming connects Paul with her ancestors and Mother Earth. Photo by Fred J. Field.

“Drumming puts me back in place emotionally, spiritually,” Paul said. “It really helps me be in the now.”

Paul earned her drum after being in recovery for a year.

“You can’t just go buy a drum,” she said. “It has to be gifted. You have to earn it. I had to be in a good place before I could touch my drum.”

“No one else can touch my drum unless I’ve given permission,” she said. “And then there is a whole cleansing and smudging it before I can use it again.”

While she hasn’t drummed for several weeks, Paul knows she will return soon. She misses the ancient traditions that connect her to the spirit world and the reservation’s sacred sites like Split Rock. The Thunder Women often drum by Split Rock, one of the most sacred sites on the Passamaquoddy reservation. The land in the distance is Canadian. Photo by Fred J. Field

“It’s so peaceful (at Split Rock), and at times I have to stop singing because the emotions are so overwhelming,” Paul said. “I feel connected to Mother Earth and to my loved ones who have passed over to the spirit world.”

Though most of the women who drum each week are Passamaquoddy, non-natives are also invited to join.

“We don’t discriminate,” said the elder Paul. “We embrace everybody. If drumming is in their hearts, then that is all that matters.”

Paul and other group members welcome the interest in their culture as Maine and the nation honor their past by celebrating Indigenous People’s Day and recognizing November as National Native American Heritage Month.

“For us (Columbus Day) was always a day of untruths,” said Cleaves. “We just want our history and our ancestors to be recognized.”

Word about the Cipelahq Ehpicik has traveled beyond the reservation. This year the Eastport Memorial Nursing Home asked the group to drum and sing for its residents on Indigenous People’s Day.

“Several of our residents and our staff are Native American, and we wanted to recognize Indigenous People’s Day for them,” said Camela Deschene, the nursing home’s administrator. “We were grateful that they came in to share their culture.”

The half-dozen Passamaquoddy residents swayed in their wheelchairs, mesmerized by the ancient chants and drums that reverberated like heartbeats.

“It was an honor to sing and drum for our elders,” said Mitchell. “We want them to know that we are keeping our culture alive, that it will not be forgotten.”