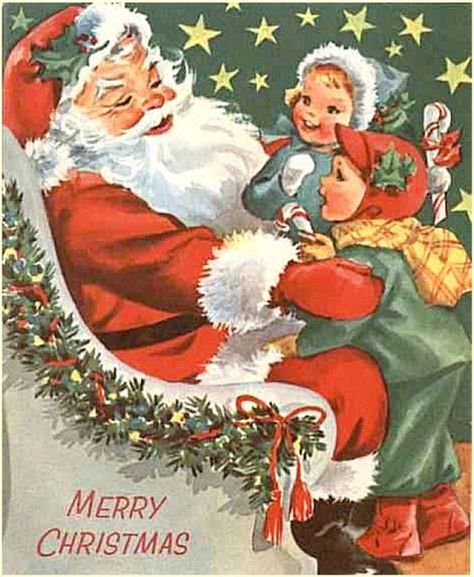 In 1952 Santa came to Vinalhaven, to the church, as he did every year, to separate the worthy from the unworthy. We all foundered in those tricky waters where worthy and unworthy were not so distinct. For we shall all stand before the judgment seat of Christ.” -Romans 14:10 simply was not as scary as actually sitting in the judgment seat, in the lap no less, of one who knew for sure, not only when we were sleeping and when we were awake, but whether we’d been bad or good or worse, for goodness sake. This was, after all, the eighth annual church visitation from Santa in my own young life, and that was eight more times than I had even seen Christ, let alone sat in his lap.

Supper that night was, for me, like the last meal of a condemned man. My two younger brothers were nervous but excited, unaware, at this early stage, of their own sinful condition. I, on the other hand, was apprehensive and anxious. The church was only a few hundred yards away and I could see, as soon as we left the house, that a big crowd had already gathered.

We found a place on the aisle next to Billy Soderburg and his mother. Like a few others of my contemporaries, Billy had no apparent father and when quizzed about this he said he was the product of an immaculate conception. On those occasions when he said that the rest of us nodded knowingly because we didn’t know what he was talking about and didn’t know what else to do but didn’t want to appear uninformed.

Across the aisle Albert Nelson caught my eye and ﬂashed from his jacket pocket, as he’d been doing for several weeks, a little glass ball in which reposed a female ﬁgure whose skirt, when the globe was inverted and snow ﬂakes descended, blew up a little like Marylin Monroe’s in The Seven Year Itch. Albert employed an evil snicker each time he exposed his little ﬁgurine in a manner not unlike that which characterized Billy’s attitude when he explained his parentage and so most of the rest of us, just as mystiﬁed about the appeal of billowing skirts as we were by the concept of conception, nodded, as before, in compromising acquiescence.

At 5:30, we were stilled by the distant sound of approaching sleigh bells. In a moment a rich baritone chortling “Ho, ho, ho & Merry Christmas” ascended the steps and all eyes were toward the back of the church.

In a shiny red suit with white fur collar, big red cheeks, black boots, and huge mittens, he was enormous, pretty much what we’d expect from someone who knew everything about everything we did and everything about everything we thought about doing and from whom we could keep nothing. He strode down the aisle turning right and left to tousle a youngster’s hair and to chuckle ho, ho, ho and when he got to Albert and patted him on the head I was afraid, much more afraid than was Albert that he would stop and say “Young master Nelson, have you been good this year? Do you not have a little female ﬁgure in your pocket whose skirt is billowing about provocatively?” But he didn’t and when his attention returned to my side of the aisle he didn’t say anything to Billy either, about his being immaculately concepted.

When he reached the front of the church the minister rose from his front row chair, and stood next to Santa, who’d turned to face us with his hands on his hips. He asked Santa silly questions then told him that all the names of all the kids had been put in a hat and, as their names were called, they could all be expected to trot down front, climb up in his lap and tell him what they’d like to have for Christmas. ‘Treetop’ Roberts was the ﬁrst name called and she kind of set the tone for the evening. Santa asked, “Lillian, have you been good this year?” and she answered, “Depends on who you ask.” When Albert was asked the same question I was very badly tempted to say ‘Look in his pocket’ but resisted easily when I considered the consequences.

I was called about halfway through the evening and headed warily down the aisle. Santa reached down and scooped me up and settled me on his lap.

“So, Phil, have you been a good little boy this year?”

“What about telling the truth. Have you told the truth this year?”

“Are you really sure?