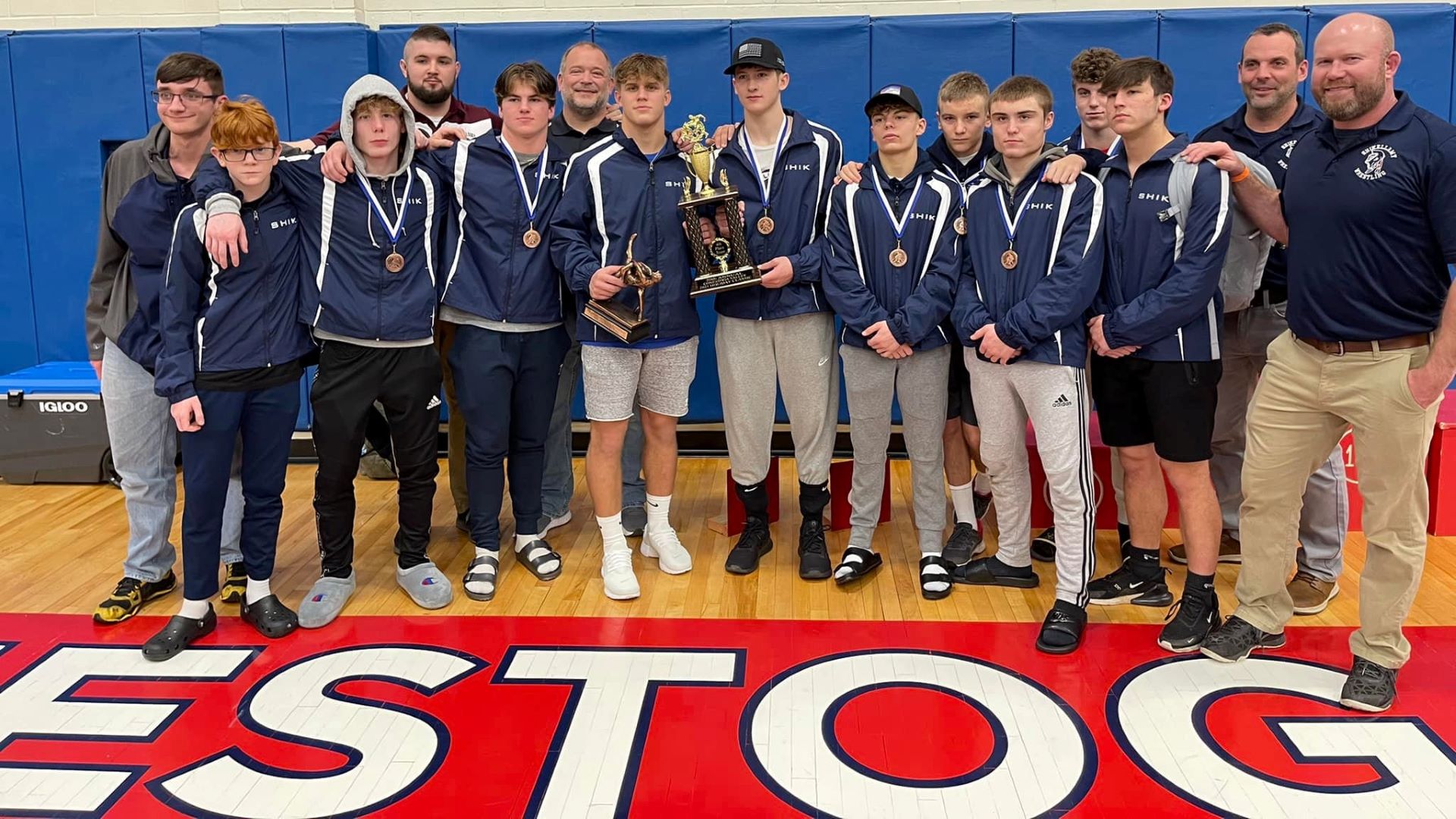 John Kelly remembers as if it happened yesterday.

A “scrawny, bony” fourth-grader named Tim Boetsch competed in a “takedown tournament,” something aspiring, grade-school wrestlers did at the old Camden-Rockport school district as a fundraiser for the larger program.

With his parents coaching from the edge of the mat, Boetsch bloodied one side of his nose, then the other. Back in the day, that injury was “treated” with gauze shoved up each nostril. Many 10-year-olds would have had enough.

“He was a little tiger,” said Kelly, who went on to coach Boetsch to four straight Maine high school wrestling titles from 1998 to 2001, and to All-American status. “I looked for traits like that. You can’t coach it. You either have it or you don’t.”

Today, a down-on-its-luck, rural Pennsylvania community that once dominated the sport in the nation’s top state for high school wrestling, hopes that Boetsch, 40, now married with a daughter and two sons of his own, still has it.

Some 560 miles from the oceanside town of Lincolnville where Boetsch grew up, one of Maine’s most acclaimed athletes is being watched anew. The low-key bruiser, who as an adult gained fame and a worldwide ranking in the cage matches of mixed martial arts fighting, faces his biggest test.

Can Tim Boetsch, the new varsity coach, help the Shikellamy High School wrestling program claw its way back to statewide, even national, prominence? Can hardscrabble Sunbury, Pa., which in 2020 saw its 63-bed hospital close after 125 years and its iconic textile mill relent to international pressure, regain a sense of pride that scholastic sports instill if performed at a premier level?

Understanding what it meant

Some of the best sports movies ever made give you an idea how top high school teams can lift a community.

“Hoosiers” shows how small-town basketball pulses through the farm country of Indiana. Tom Cruise’s “All the Right Moves,” and the book, movie and TV series “Friday Night Lights” do the same for high school football.

At Shikellamy, from 1970 until 1995, it was wrestling. Meets drew crowds of 2,000 or more, shoulder to shoulder, packing the school’s old Field House.

During its best decade, 1980 to 1990, the undersized school dominated the state’s largest wrestling category, going 171-17-2 in dual meets. The school produced 13 individual state wrestling champions during that era, won three Pennsylvania team championships in a state with 474 high school programs, and later claimed a national champion, Jeff Walter, for the University of Wisconsin.

“You wanted to be part of it,” said Jeff Balestrini, a Shikellamy School Board member and local banker, whose son, Cade, was a standout wrestler himself. “If you wrestled for Shikellamy, you were going to states. You were tough. You were a winner.”

But high school athletic programs, like local economies, can be cruelly cyclical.

Shikellamy Athletic Director Tim Foor said the student body’s talent level tailed off starting in the early 2000s. The wrestling program bounced back a bit until five years ago, then ebbed again.

“It happens to all schools,” he said. “Unfortunately we went into a downward trend.”

There was also the money factor. Even in youth and high school sports, and even in a simple sport like wrestling, finances weigh heavily.

Balestrini said Shikellamy’s secret for years was an intense, well-coached feeder program at the local YMCA. Kids started wrestling in third and fourth grade. They yearned to compete under the white gym lights when their high school days came, with thousands of cheering fans a few dozen feet away. Over time it wasn’t enough. As Pennsylvania wrestling grew in popularity, the Sunbury program could no longer match professionally coached wrestling clubs that wealthier families in the Philadelphia, Pittsburgh and Harrisburg suburbs pay $10,000 a year to have their elementary and middle schoolers join.

Year-round travel teams are where it’s at, Balestrini explained. Many Shikellamy parents don’t have the funds, time or commitment to spend weekends going to places like Lancaster, Pa. and Bel Air, Md., so their kids can face top competition. A plaque in Sunbury, Pa. commemorates a major historical achievement by Thomas Edison.

Today, Sunbury has a population of 9,719. Some 100 years ago, 40 years after Thomas Edison chose Sunbury as the first place in the world to wire a commercial building with incandescent lighting – a hotel that now bears his name – Sunbury had 15,720 residents.

Just as Maine does in some of its northern and western towns, Sunbury watches decade after decade as the U.S. census shows bedeviling population losses.

Even more telling, Sunbury has an owner-occupied dwelling rate of 46.1%, meaning more than half of all homes in the city have absentee landlords, many from out of state. Homes in Maine, by comparison, are 71.3% owner occupied.

Sunbury is not the only town represented at Shikellamy. The adjacent borough of Northumberland sends students there, as do several surrounding townships that used to be rolling farmland and now are dotted with newer homes. But Sunbury is the largest municipality in the district, and the high school’s home.

There are positive signs, said Jennifer Wakeman, executive director of DRIVE, an economic development organization that serves five counties in the region. She pointed to a $2 million grant announced on Jan. 4 that will prepare a 21-acre, former industrial site in Sunbury for development, riverfront land that has been gray, flat and empty since 2008. The area’s unemployment rate is higher than surrounding counties. In this crazy COVID economy, employers view that as positive because workers may be available.

“I work with a large number of folks who were born and raised in this area and have stayed to build their lives here,” Wakeman said. “They are some of the most dedicated, intelligent and hard-working people who are 100% committed to making their hometown the best it can be.”

Tre Bittner, a 1979 Shikellamy graduate and varsity athlete, is an example of a proudly stubborn local who wouldn’t live anywhere else.

He attended college at nearby Susquehanna University, achieved success in the health-care insurance field and built a home two blocks from where he grew up — literally in the shadows of the now-shuttered local hospital.

Bittner, a former member of the hospital’s Community Advisory Board, describes the University of Pittsburgh Medical Center’s decision to close Sunbury Community Hospital in March 2020 as a gut punch. Bittner, who follows Shikellamy sports with a passion, senses a new optimism over the wrestling program. He heard of Boetsch’s Maine high school success and mixed martial arts fearlessness.

Boetsch arrived in Sunbury 18 years ago in a time-honored way: He married his way there. After graduating from Camden Hills High School in Maine, and wowing coaches at a for-state-champions-only wrestling tournament in Pittsburgh in 2001, Boetsch attended Lock Haven University of Pennsylvania on a Division I scholarship. There, he met a Sunbury woman — whose father and uncles were star wrestlers — named Jade Fatool.

Introduced to mixed martial arts fighting by a college roommate, Boetsch had his first two fights on the same weekend, when he was 24 and living in Sunbury. He won both and decided to fight professionally, earning between $200 and $400 for his early bouts.

“It instantly clicked,” Boetsch said, during an interview with The Maine Monitor. “This was something I wanted to pursue.”

Boetsch fought under the name “The Barbarian,” climbing his way into the Ultimate Fighting Championship series, the highest level of MMA combat. His career record was 21-13 over 11 years — a long time, by UFC standards — at one point rising to a No. 5 world middleweight ranking.

Two of Boetsch’s biggest fights were a technical knockout of Yushin Okami in Japan in 2012, in what one announcer called the greatest comeback in UFC history; and a TKO over Brad Tavares in Bangor in 2014 on the only UFC card ever held in Maine. Boetsch trained with Maine native Marcus Davis for that fight. The Cross Center roared when its native Barbarian won “the fight of the night.”

His UFC days ended in 2019, but Boetsch believes the experience will pay off as the new high school coach.

“I understand all of it,” he said. “How to fuel the body. How to let the body recover. So many coaches beat their athletes down, by the end of a season they’re just worn out.”

Nutrition, weight loss, coping with injuries, competing under pressure — Boetsch has done it across the globe. And his wrestlers know.

All eyes are on him

Boetsch acknowledges the community yearns for another comeback. It’s too soon even to speculate, but early results show some promise.

Shikellamy placed fourth among 27 teams at a tournament at suburban Conestoga Valley High near Lancaster. It beat Lewisburg in December, lost 36-30 to a much larger high school from State College, Pa. (home to Penn State), then smoked nearby Shamokin Area, 66-6. Boetsch’s team suffered a surprisingly lopsided loss to rival Selinsgrove at home last week, 50-17.

Aided by a staff of capable assistant coaches — one a school administrator and one a teacher — Boetsch said his wrestlers are accepting incredibly high standards.

Low aspirations are “a plague that exists across the nation, a huge problem.” He tells his team that focusing on what’s important and working hard still result in success.

Boetsch said the best is yet to come. Wrestling teams ultimately are measured by how many individuals advance beyond the end-of-season district and regional tournaments. This year’s state meet will be at Hershey, Pa., in mid-March.

“Let’s just say we’ve already got rooms booked for Hershey,” Boetsch said. “We’re going to take some athletes there. We’re going to put on a show.”

Foor, the Shikellamy athletic director, said the wrestlers show a different mentality this season, which he attributes to Boetsch.

“How can you doubt the guy who has competed at the highest level?” Foor asked.

Boetsch also predicted a renaissance for the area that he calls home. He and Jade own a successful Pelican’s Snoballs franchise in the city. They recently bought a vacant former trucking building with plans to develop it.

Too many people are trying too hard for the revitalization to fail, he said.

“Living on the coast of Maine is very different than in central Pennsylvania farm and coal country,” he said, quickly adding that in some ways it isn’t. The fishing is good in both places. Deer hunting is, too.

Which brings us back to Kelly, Boetsch’s high school coach in Maine. Now retired from coaching, Kelly saw that Boetsch had leadership skills dating to his high school and post-collegiate days.

In high school, Boetsch recruited other students to come out for the team he captained. After college, Boetsch would return to Camden and Lincolnville, “and he was like a hero. He’d teach the kids a move, and we’d all watch them listen.”

Great coaching isn’t about yelling or intensity, or even technical knowledge, Kelly said. “It’s about how to get through to different people with different personalities.”

That’s a trait that the quiet Barbarian possesses naturally, his coach said. Is Boetsch the guy who can lead Shikellamy back to wrestling prominence, even if so much has changed in that area of Pennsylvania since the 1980s?

Kelly answered, without pause: “I’ll be shocked if he doesn’t, honestly.”