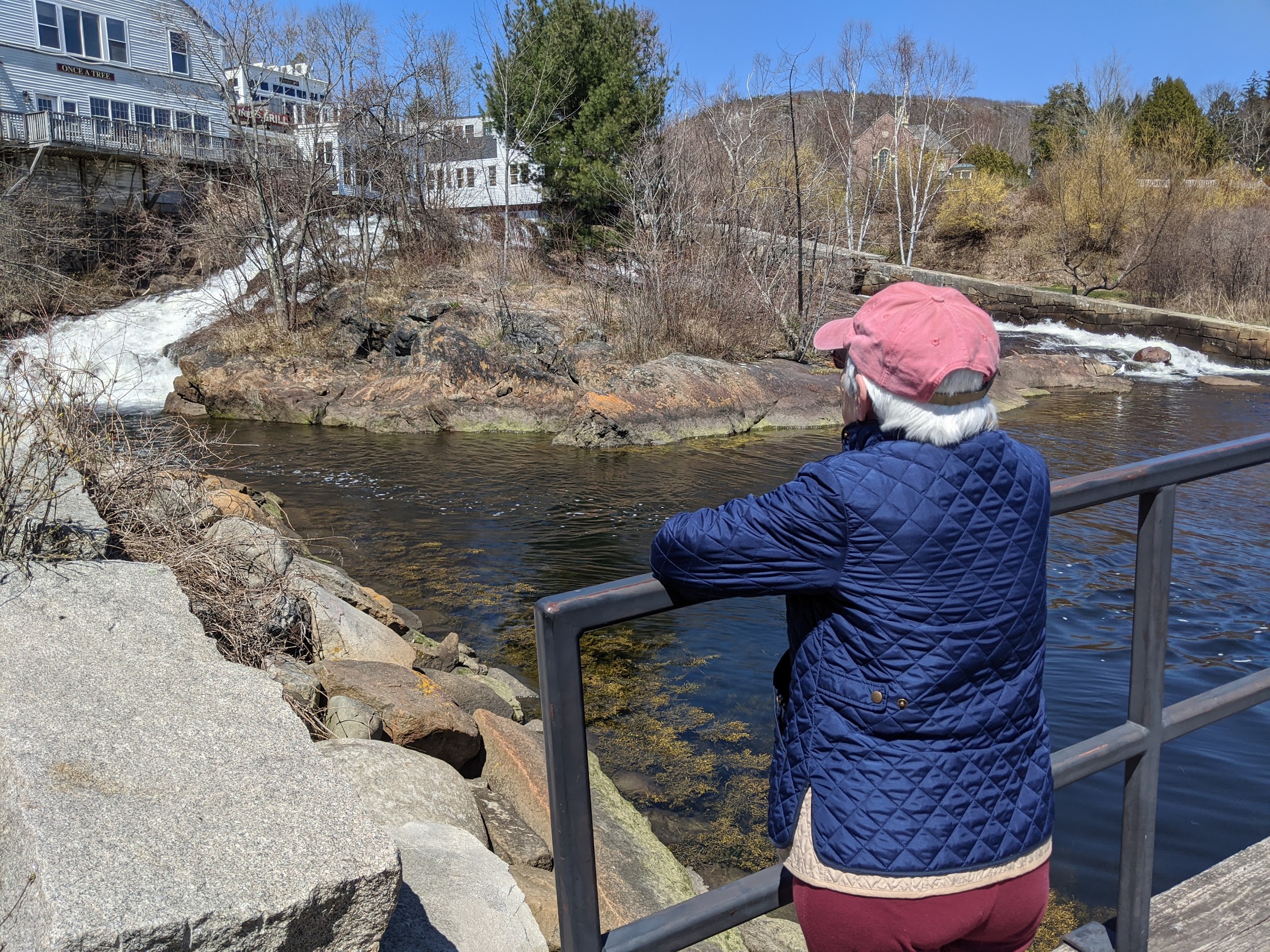 This is part 1 of a two part post, 235 Years of heritage on the Megunticook River.

After studies, discussion, and/or information circling Camden today, we’re all talking about the “Montgomery Dam.” It’s the last dam from Megunticook River, where the water cascades with beautiful falls into Camden Harbor. The Philip Montgomery family gave it to the town in 1992. The selectmen gladly accepted it because the town could then control the flow of the river by opening and closing the Twin Dams where Megunticook Lake joins the river, the Seabright Dam (once owned and cared for by Joseph Sawyer) and the last dam (Montgomery). Kenneth Bailey, one of Camden’s most dedicated residents, spent many days and nights doing the work necessary, so that Camden would not be flooded. Today that work is done by Camden’s Wastewater Department.

The Department of Environmental Protection required registration of all dams by listing the name of the owner; name of the dam; year built; when last inspected; number of gates; height; weight; condition, etc. Guess it really was dam important. The town Dam Committee monitors the use and condition of the dam, advises the Select Board on maintaining a desirable level of water in Lake Megunticook and Megunticook River and inspects at least once a year the three dams that are owned by the town. I believe now instead of the DEP, it is required by The Maine Emergency Group.

The stream, or Megunticook River, as it is called, is three miles long and gradually drops 142 feet from the lake to sea level. It is the only river in Maine that the ocean never enters, even though the fresh and salt water do come together near the falls, at the head of the harbor.

My article today is not to take sides but to give you some of the history of that little river that once had as many as ten dams. It was the lifeblood of Camden because of the many mills that needed only enough water power to operate.

The first dam at the Lake was built on land owned by William Molyneaux, of Boston, when he bought land in 1786. Today, these dams are referred to as the East and West Dams at the intersection of Molyneaux and Beaucaire roads. He built a saw mill and a grist mill, as well as his summer home, about 1794. The land was a high elevation, so divided it from the river. History has it that he was fishing, when his canoe capsized and he drowned. He was a good swimmer but his “unfortunate habit of imbibing” hampered his attempt to save himself. His tight-fitting hat kept him afloat, and his body was easily found.

The Megunticook Woolen Company was organized in 1888 on what was known as the Batchelder Privilege, next below Molyneaux. It manufactured felts, but was not successful and closed in a few years. In 1905, it was purchased by Williams and Paige and operated as the Seabright Woven Felt Company. In 1930, it was the first mill in Camden to have automatic looms. It made tennis ball covers, belts for making soda crackers and pool table covers, among other things. It also was the first Camden peacetime industry to begin work for the World War II effort. It made 360 different types of mechanical woolens for various machines and was, at that time, the only one owned by out-of-state people.

E.H. Barrett and John Swann erected a paper mill on the third privilege in 1828. It manufactured $40 worth of paper a day. In 1841, the mill burned. It was four years later that Charles Davis, Lorenso Swett and John Ricker purchased the old mill lot and water privilege for $350. They bought an adjoining piece of property for $14. They started a gunpowder mill. Before their business had gone a full year they had an explosion. The Camden Herald reported:

“The powder mill at Camden was blown up on Friday evening about 9 o’clock. The accident occurred after the workmen had gone home, so consequently no one was hurt, but considerable glass was broken in the immediate vicinity. This report was heard and the shock felt many miles distant. In Union the flash was seen some seconds before the report was heard. The loss was estimated at $1,000.”

After that the business changed ownership many times and workers were hard to find. Another explosion was reported in The Rockland Gazette in 1853. Houses shook, windows broken and lights on Curtis Island were extinguished by the explosion. Next it was owned by Dr. Deplura Bisbee, of Camden. About 5,000 kegs of gunpowder worth $17,000 were made each year. It required 50 tons of saltpeter, 17 pounds of brimstone and 60 cords of alder wood. The brand name was “Waldo Mills,” and claimed to be the finest quality. He also made blasting powder for the lime quarry industry. There were nine explosions in all and only two to four workmen were employed, although there were 16 buildings on the property. Dr. Bisbee was very successful, but sold the property to a woolen company in 1892. It was called the Mt. Battie Woolen Manufacturing Company. It later was known as the Hughes Mill, later becoming a poultry company. That property was used by the Moss Tents business, which was founded in 1975 and later moved to Belfast.

Ending with that excitement, we shall blast off and continue information about more mills, in the next article.

Barbara F. Dyer has lived all her life, so far, in Camden and is the official town historian.

Permission to use this article has been graciously provided by Barbara Dyer.