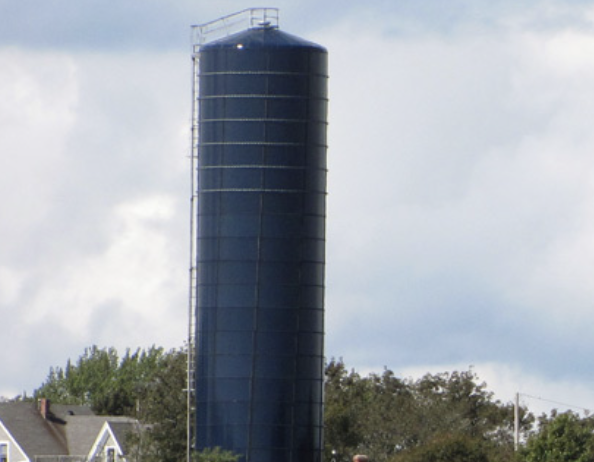 Standing at the toilet early one recent morning was a little startling. It’s not usually. I’m customarily quite at ease. Anticipating the great relief I am accustomed to experiencing at this time each day I was taken aback brieﬂy and my eﬀort stalled when I realized the water level in the appliance’s basin was advancing toward me at an alarming rate. Before it had reached the rim, however, and to my great—albeit diﬀerent—relief, it began an equally energetic retreat and then repeated the cycle such that I felt reasonably secure in resuming my business.

From the modest heights of Skin Hill, an intriguingly named granite rise, the standpipe occupies a lofty perch overlooking the village some sixty feet below. The standpipe is the town’s water tower and ultimate source of that precious commodity. The water from our town’s reservoir, some three or four miles away in the island’s interior, is pumped regularly to the standpipe to maintain a dependable level—a huge column of water—which in turn gravity feeds several hundred of our homes below via an underground delivery system, some of it still functioning well after over a hundred years.

This “historic” storm was such that the gusts of wind screeching sporadically over the top of the tower created wildly irregular water pressure throughout the village. When winds reached sixty or seventy miles per hour, as they did yesterday and continue throughout the day, the vacuum created in that space between the wind and the water within causes the level of that huge column to rise which, in turn, creates a lessening of pressure in the town below. During intermittent windy intermissions the water column subsides and the sudden but brief added weight of the water column falling, just a tiny bit, causes an increase in that pressure down here in my bathroom and elsewhere. As the water column falls the corresponding level in the toilet rises; as the former rises, the latter falls. It was a little disconcerting early that morning, the time of day when faculties, mine anyway, are not at their sharpest.

I don’t know if this storm was “historic” or if weather folk are just hysterical. The latter often seems to beget the former. Just a few years ago our own snow removal people were standing on Main Street drifts that were above the second story of some of those businesses. In the thirties the snow on Main Street was so deep the townspeople simply tunneled through and strung lights within, rather than try and remove the vast accumulation. Meanwhile I will approach my customary business tomorrow morning with less trepidation.

Visit my blog at philcrossman.com for more Observations and to learn about or purchase any or all of my four books.