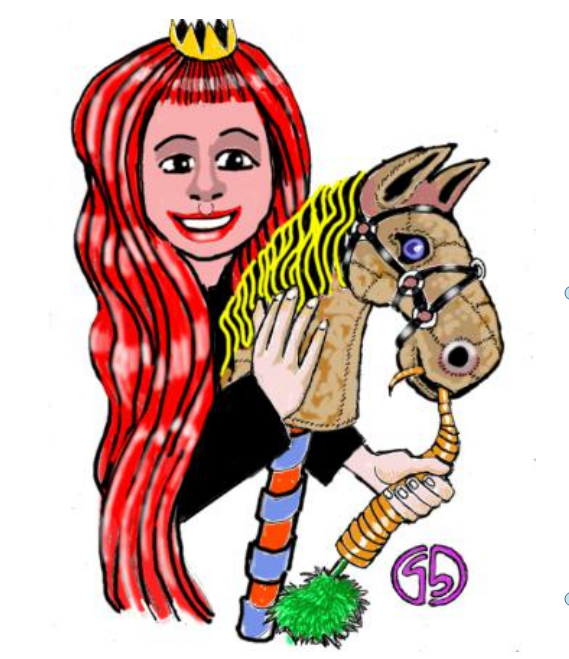 The Finns are an interesting people. They have a language to me as obscure as Chinese or Arabic. One Finn I remember in Ecuador sat while I drew his portrait. We were opposite each other at a table in Charlitos bar and grill. The table was a battleﬁeld of dead soldiers. That’s slang for empty bottles. Never try to keep up with a Finn in emptying bottles. My subject would be chatting away, in Finnish, I guess. It could have been heavily accented English. Either way it was unintelligible to me.

Too bad, I might have asked him about one of Finland’s recent exports, Hobby Horse Dressage. It is oﬃcially a sport and gaining popularity world wide. in Finland, where it ﬁrst surfaced only a decade ago, there are an estimated 10,000 “Stick Horse” enthusiasts. For a long time I couldn’t watch it without uncontrollable spasms of laughter. Something about it was so captivating, so poignantly unreal, such emotional depth.

Here were adolescent girls prancing around a gym ﬂoor holding the reins of a “hobby horse”. A sewn and decorated fabric horse’s head mounted on a stick. The girls would emulate the dressage riders who compete on real horses. They would keep themselves stiﬄy erect from the waist up. Their faces holding serious expressions. Eyes ﬁxed. Their lower half pranced and leaped and cavorted as a horse would. Equally serious judges viewed each rider and took notes.

The girls were competing with events that mirrored the sport thay had appropriated and made their own. Speciﬁcally, Dressage, the art of riding and training a horse in a manner that develops obedience, ﬂexibility, and balance. Also jumping, both low and high barriers, called puissance. The winner beams smiles to supporters and family. The loser shed tears and was consoled.

For sheer fun, and training for competition, girls will “ride” alone or in groups, through the woods. Its role playing and that might be the root of its visual quality, the reality they were participating in was invisible to the camera yet in their minds they rode a living animal. Young girls love horses. I don’t know why, but they do.

Keeping a horse isn’t cheap. Its needs are for food, shelter, medical care and exercise. All expensive. My ﬁrst thought on encountering this movement was sympathy. This was the only way these girls could participate. Real horses were not possible. So they created work arounds, the wooden stick with a horse’s head. Everything else was REAL. The emotion, the audience’s reaction, the judges keen observation. There are even Veterinarians at some events giving advice on equestrian medicine. They’ve invented something new. It took just a little bit of suspended disbelief. The horse becomes real when everyone believes.

At these events everyone does believe, and with passion. The excitement among “tween” girls has spread around the world. An industry producing the Hobby Horse for enthusiasts has sprung up too. On the Irish Etsy website, where crafters oﬀer their work, 500 items are listed for the sport. One young horse maker in Finland is selling custom stick-horses for 100 to 300 Euros each. A pair were requested by the government in Helsinki as gifts to the royal children of Prince William.

It is amazing how things, ideas, can be interconnected in history and culture. The word hobby for example. Stamp collecting is a hobby. Ham radio is a hobby as is model railroading. The word hobby is derived from the ﬁrst “hobby horse” which appeared in the early 1800’s. It was much as the current stick-horses are but it had a wheel at the lower end of the stick. It was named after an extinct Irish animal. The name ﬁrst in French, the “Haubini” became, “Hobbeye”, then it took on the spelling we know. The meaning of “hobby” for avocation was derived from this ﬁrst stick-horse! A hobby was a non professional activity. Riding a “hobby horse” also came to mean speaking on a favorite subject.