Maine company plans to bring tidal power back to Eastport 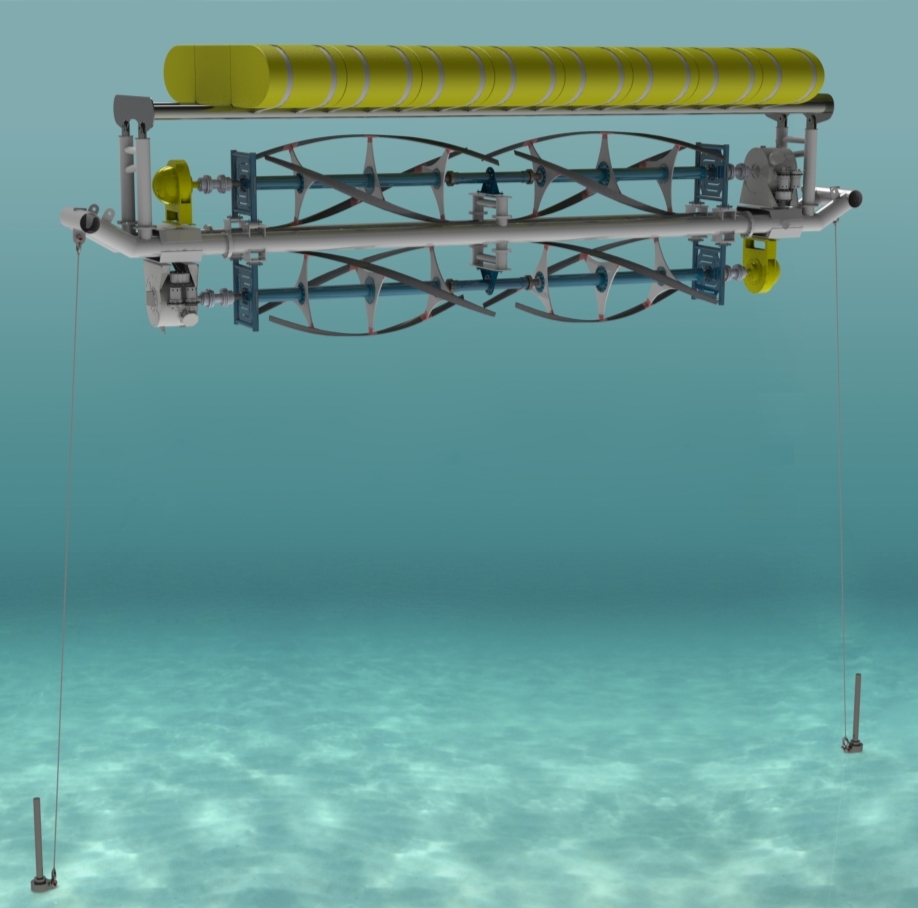 The RivGen device (pictured) operating in the Kvichak River in Igiugig, Alaska is similar to the one that would sink in the Western Passage between Eastport and Deer Island, New Brunswick. Photo courtesy of Ocean Renewable Power Co.

Anyone who has plied the waters of the Western Passage between Eastport and Deer Island, New Brunswick, knows the Old Sow. One of the world’s most powerful whirlpools, the currents and eddies (or “piglets”) have been known to separate divers from their chase boats by hundreds of yards and shoot upwellings that rock even the sturdiest of vessels.

Those currents may be treacherous for mariners but could be perfect for tidal energy. That’s the thinking of Maine-based Ocean Renewable Power Co., which plans to install a tidal generating device in the area as part of a microgrid that will serve as backup power for the city of Eastport. If all goes according to plan, the full-scale device, which looks a bit like a giant DNA double helix anchored to the ocean floor, would be installed by 2025, just east of Dog Island, as long as the company can secure permits from state and federal agencies.

This is not the first time ORPC has tested the tides in the area. The company sank a similar, earlier version of its tidal generator in the waters of Cobscook Bay, on Eastport’s western shores, a decade ago. That project, which had a maximum output of 150 kilowatts of electricity, enough to power about 25 homes, became the first commercial tidal energy project in North America to connect to the grid.

But the success was short-lived: The unit stopped delivering electricity less than a year later, after salt water infiltrated its electric generator. The apparatus was hoisted from the water and plans were made to reinstall it, but ORPC ran into difficulties finding a replacement generator supplier, a problem that persisted for several years.

The Cobscook Bay project never did get reconnected, but the company learned a lot in those few months — about bolted connections shrinking in seawater, weather delays, and more cost-effective ways to deploy and retrieve the unit, all changes that have been incorporated into the new design, said John Ferland, the ORPC president.

“I’m talking about things that aren’t glamorous, like bearings and struts,” said Ferland, of the changes made to the device to address saltwater intrusion and other issues. “If I showed you two pictures, one of what our device looked like 10 years ago and what it looks like now, I think you would say ‘gosh, there’s not much difference.’ Behind the curtain a lot of things are different.”

Eastport, at the end of a single 40-mile transmission line, used to rely on three decades-old diesel generators to provide power to residents if storms or accidents interrupted the power supply.

But after the electrician servicing the generators retired, no one got them running again, said Will Hopkins, a longtime resident and president of the Cobscook Bay Resource Center, and Versant Power turned its efforts into reinforcing the existing line.

Those who can afford it now have home generators, and “the people that don’t have any money sit in the dark,” said Hopkins. “Given that so much of Eastport’s population is very elderly, that’s a lot of people that are not set up to survive for very long without electricity.”

A microgrid, a smaller version of the mainland grid that could run on its own using localized energy generation (solar, tidal power) and energy storage in the form of batteries, was an attractive option to replace the town’s diesel generators. But it would require a lot of engineering and resources too expensive for the town to pursue alone.

With help from the Island Institute, Eastport was selected to participate in the Department of Energy’s Energy Transitions Initiative Partnership Project (ETIPP), which provides free technical assistance to communities working to become more energy resilient. Islesboro was also one of the 11 communities nationwide selected to participate in the 12- to 18-month program.

Alongside ORPC, the Island Institute and Versant Power, the DOE is working with Eastport to locate and size a microgrid. Planning is still in the early stages, but the ORPC’s tidal power device would be an integral part of the backup power generation, along with solar and battery storage.

It doesn’t appear the grid will need any upgrades to accommodate the additional energy input, said Judy Long, a communications manager for Versant, but the company wants to make sure that whatever is installed can handle the anticipated increase in electricity needs in the future.

The system also must be able to take in energy from resources that generate intermittently (solar, tidal) and balance that with feeding the energy back out when the town is in “island mode,” disconnected from the larger grid.

Engineers have long dreamed of harnessing energy from the tides, but getting entirely submerged projects running has proven difficult. France and South Korea have long-running tidal energy projects, but while they use turbines to generate energy from the movement of the tides, both look more like traditional dams than the device designed by ORPC.

That’s one of the selling points for ORPC’s technology, said Ferland.

“Our footprint is quite small,” said Ferland. “If you took a megawatt of tidal energy and compared it with a megawatt of traditional hydro, or even a solar farm or wind farm, we’re using a percentage of the land area with our device.”

The project ORPC has planned for Eastport would eventually consist of a 5 megawatt project with three to five devices, each measuring 122 feet wide by 71 feet high, installed in a submerged array. That’s similar in size to a commercial solar array, but with more consistent and predictable power generation, one of the advantages of tidal energy. The company will start by testing a smaller, similar unit in the area.

That reliability, said Ferland, along with redesigns over the years, have helped ORPC’s projects demonstrate energy output comparable to more traditional hydropower projects such as dams, and higher than wind or solar.

Tidal power also has its drawbacks. Today’s designs are only commercially viable where large volumes of water move extremely swiftly, which also means increased wear and tear on components, and makes installation and working on devices a challenge.

“There’s not a volume of product in the marketplace, so we haven’t hit the point in the curve where we’re drastically reducing our costs,” said Ferland.

Most hydrokinetic devices are also expensive to produce and have a shorter lifespan than traditional hydropower dams, which are far more environmentally disruptive to build but, with maintenance, can often stay in place for more than 100 years.

Cobscook Bay is one of the most biologically diverse bodies of water on the eastern seaboard, said Hopkins, who for many years has taken a skiff out in the fall to watch marine mammals eat and play.

Minkes, finback and humpback whales can be seen diving and broaching, and on a really hot day you might even catch a tuna jumping, said Hopkins. Leatherback and Loggerhead sea turtles, both endangered, have also visited the area.

Given that, the idea of putting a series of spinning blades below the surface of the bay raised more than a few eyebrows when it was first suggested. So in 2012, alongside researchers from the University of Maine, ORPC set out to study the behavior of fish, birds and marine mammals in the area, both before and after the installation of the Cobscook Bay test project.

Some tidal power projects, including the Annapolis Royal in Nova Scotia, have caused serious harm to fish, but little was known about devices like the one ORPC planned to employ.

Using underwater cameras, acoustic monitoring devices and observation, researchers examined fish behavior in the area over several years, including with the turbine in operation. Results were promising: After hundreds of hours of observation, the group saw no deaths related to the turbine. The company has also been studying the behavior of marine and aquatic animals in nearby Western Passage before deploying a device there.

“As it turns out, fish are really pretty good at sensing objects on the ocean floor or floating on the surface, or objects with big teeth,” said Hopkins. “They just flowed around it.”

Similar results were observed with the tidal generator ORPC installed in the Kvichak River near Igiugig, Alaska, which recently became the longest operating device of its kind in the Americas. That design, which the company calls RivGen, is similar to the one ORPC plans to sink in the Western Passage. The Kvichak River, the only connection between Lake Iliamna and Bristol Bay, has the world’s largest run of sockeye salmon, with millions returning each year to spawn. Igiugig residents rely on the river for drinking, tourism and subsistence fishing, and were wary of anything that might disrupt that.

“It’s the purest water on earth,” AlexAnna Salmon, president of the Igiugig Village Council, told Frontiers 180 in 2019. The council was the first tribal government to get a federal license for this type of hydro project.

Several years of monitoring the Igiugig device, according to ORPC, have not shown “a single injury or mortality to marine or aquatic life.”

Word of ORPC’s plans has yet to reach most residents in Eastport. Community meetings are scheduled for the coming months, and there are still a number of steps before ORPC can install the device, including obtaining permits from the Federal Energy Regulatory Commission. The device also will require state agency approval, including from the Maine Department of Environmental Protection and the Bureau of Public Lands.

ORPC wants to test its device in Cobscook Bay this year and next before moving into full-scale deployment in the Western Passage, scheduled for 2025, said Susy Kist, the company’s director of communications, in an email.

Hopkins doesn’t expect much local opposition, given ORPC’s history and the Western Passage location, where few fishermen set traps, “but you never can tell.”

Both Hopkins and City Council President William “Billy” Boone said ORPC has worked with the community over the years.

“There’s been no shady dealings or backyard stunt pulls. They’ve been upfront with us and we have with them,” said Boone.

“They do things boldly but also incrementally,” said Hopkins. “Then they look long and hard at the results, then they adapt their device or procedures accordingly.” It also doesn’t hurt that one of the company’s longtime employees, Bob Lewis, is an Eastport native.

“We’re willing to listen and see if it’s anything that’s going to benefit the community, and at what cost is it reasonable to accept this,” Boone added. “A lot of it depends on the water — fishermen, lobstermen, scallop draggers — those are the people it will really affect.”