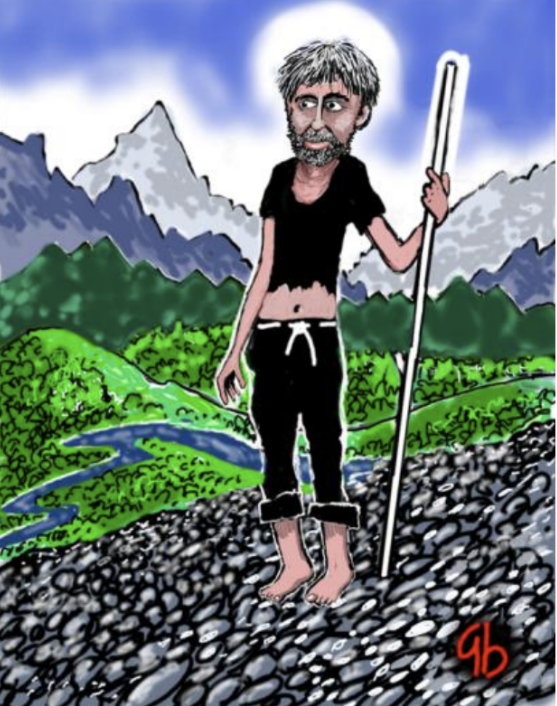 The news that Arturo had died reached me last week. He was found along the road between Malacatos and Vilcabamba in southern Ecuador.

I knew him and didn’t know him. He was a beggar. When I lived in Vilcabamba I thought of him as the dean of beggars. He was that in the sacred valley. He lived on the edge of Malacatos but did his begging in Vilcabamba, that’s where the money was. To get there he commuted on foot, walking ten KM each way. That’s twelve miles daily.

On arrival he ate a simple meal at the Juice Factory. Breakfast was a bowl of soup and cup of coffee. It was given gratis on the steps in front of the restaurant. As he sipped soup he squinted and surveyed the scene, the church and park at the center of town.
I imagined he’d developed a sixth sense over time. A sense telling him how the day’s takings would go. The taxi stand next to the park gave clues. Were they busy? Often there’d be flocks of European tourists on the church steps. If there were, he’d grab his stick and run toward them. He threw his stick to the ground as he ran, lest it seem threatening to anyone.

Arturo knew fresh visitors had coins and would start his day properly. What did the visitors see running toward them? Did they see an emaciated old man? Did they part with their dollars imagining Arturo was starving? They might have thought that – he was thin and light, but he wasn’t starving. He was healthier than you or I. Exercise, clean air and water, moderate diet of fresh natural food. Thin as a rail but all the healthier for it. He was so light he seemed to float. He ran as might a lithe ballet dancer flitting across a stage.

When several groups of potential alms givers stood in the square he flitted among them. Then I thought of a hummingbird, a blur moving between flowers. This was Arturo’s show. A presentation with costume and choreography. His set, the plaza – fountain and church were backdrops.

There were other beggars in Vilcabamba. One who’s name escapes me now was a bit pushy. He would poke at potential donors. There was a Kichua (native) woman and her three children. She only begged when she wasn’t sewing intricately embroidered rectangles of cloth. These she sold from the sidewalk. The kids played nearby. I always had my sketching kit with me and would give the kids paper and pencils. Children love to draw, it seems universal.

There were other artists, con artists, hustlers. They ask for money too, but only after a build up, a story. These tricksters worked the square until they hooked a fish, often for thousands of dollars, then they disappeared. But Arturo could be counted on. He took his profession seriously. As with many things cultural beggars can be a litmus. So many tourists and retired expats felt guilty for being rich. Not rich where they came from, the USA or Canada or Europe, but rich by Ecuadorian standards. To Arturo they were like direct deposit. They always had a dollar coin ready for him on market day. He had supporters who gave him clothing. But it didn’t take long before the dusty path he daily trod gave his togs the patina appropriate for a beggar.

The same week the Queen of England came down with Covid, Arturo left the main road and stepped onto a path to the afterlife. Nature doesn’t respect any hierarchy. The beggar or Queen fare as do you or I.