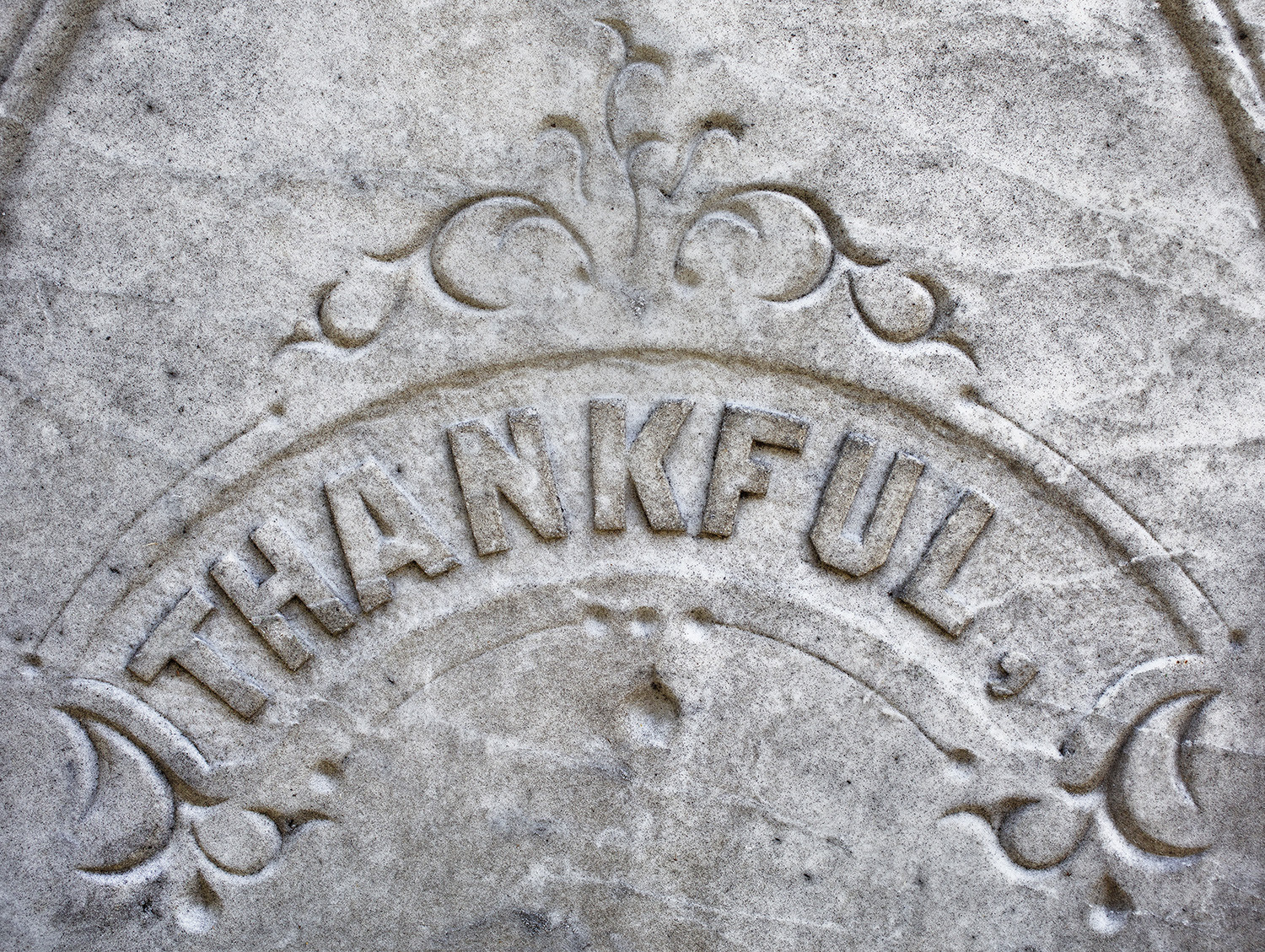 In the throes of a subsequent 2016 family medical crisis, as well as planning for my upcoming trip to the Arctic , I had forgotten all about that photograph, but the second I stumbled across it again—in May of this year—my original excitement at the time of creating the image was renewed…and then some. But the photograph I had made was, upon closer examination, flawed. I was driven to re-shoot it.

I had forgotten which cemetery it had come from, but using the meta-data embedded in the capture, and cross-referencing that date with my log book aboard Raven I pretty quickly pinpointed the Carver Cemetery on Vinalhaven as the location. A recent trip to the island, and a short walk up from the harbor to the cemetery, with a few minutes of searching for that particular headstone and voilà, there it was for me to more carefully re-photograph.

What so grabbed me about it that first day—and to this very minute—was/is the comma. Yes, the THANKFUL grabbed my attention from twenty feet away, then and now. I live my life filled with gratitude and quiet thankfulness for my many, many blessings. So of course the word caught my eye.

It turns out that Thankful was her name…and the stone only further revealed that she was the wife of Samuel C. Burgess and that she had died on August 24, 1891. As so often happens, there was an entire life’s story left unwritten…and it’s those untold stories that draw me to wander around older cemeteries. But in this case, on that specific stone there was an additional mystery.

So, what is the comma all about???  I have never before seen a comma used in this manner on a headstone and it fascinates me to this minute as I sit here sharing this with you. I just cannot quite stop wondering about this. Further, her stone gives so little other information about her; no birthdate, just the name of her husband and the day she died. How old was she? What sort of live had she lived there on the island? Children? Was she, indeed, thankful for the life she led?

Of the many cemeteries I have visited and the many stones I have photographed, this one intrigues me like no other.

With all this running through my mind last week, I sat in my studio to work on the new photograph of her headstone. There were a few small things that I wanted to do to the image in my “digital darkroom” and as I sat in my darkened room I had plenty of time for my mind’s eye to wander back in time. As I worked and as I daydreamed about her, of an instant another mystery revealed itself to me…one that really electrified me and compounded the several existing, unanswered questions.

You see, all of a sudden I realized that the spacing of the letters was very irregular; on the left the letters are close to each other and the “T” is very close to the edge of the “window” wherein her name is carved. But as one letter follows another, they slowly grow further apart. As with the comma, I have never seen this before.

This could easily be explained as the stone-carver simply running out of space…a nineteenth century version of the old joke about “plan ahea…d,” but in this case that explanation doesn’t work for several reasons. First, because of its major granite quarry industry, Vinalhaven had as residents some of the finest stone carvers in the world. Further, headstone carvers always used stencils to ensure accuracy before enshrining someone’s passing for all time. I believe that none of this was accidental…not at all.

First, the beautiful name…sigh…then the comma and then utterly unique spacing. All mysteries of the first order.

I must admit that all this has really sunk a hook into me. I have promised myself that when things slow down just a bit from the current summer frenzy, I am going to spend some time over on the island learning what I can about her. I further promise to share with you whatever I—hopefully—discover.

Thankful, whoever you were, I am thankful.

Until next week, my friends,