Browntail moths returning, but scientists are working to limit their spread 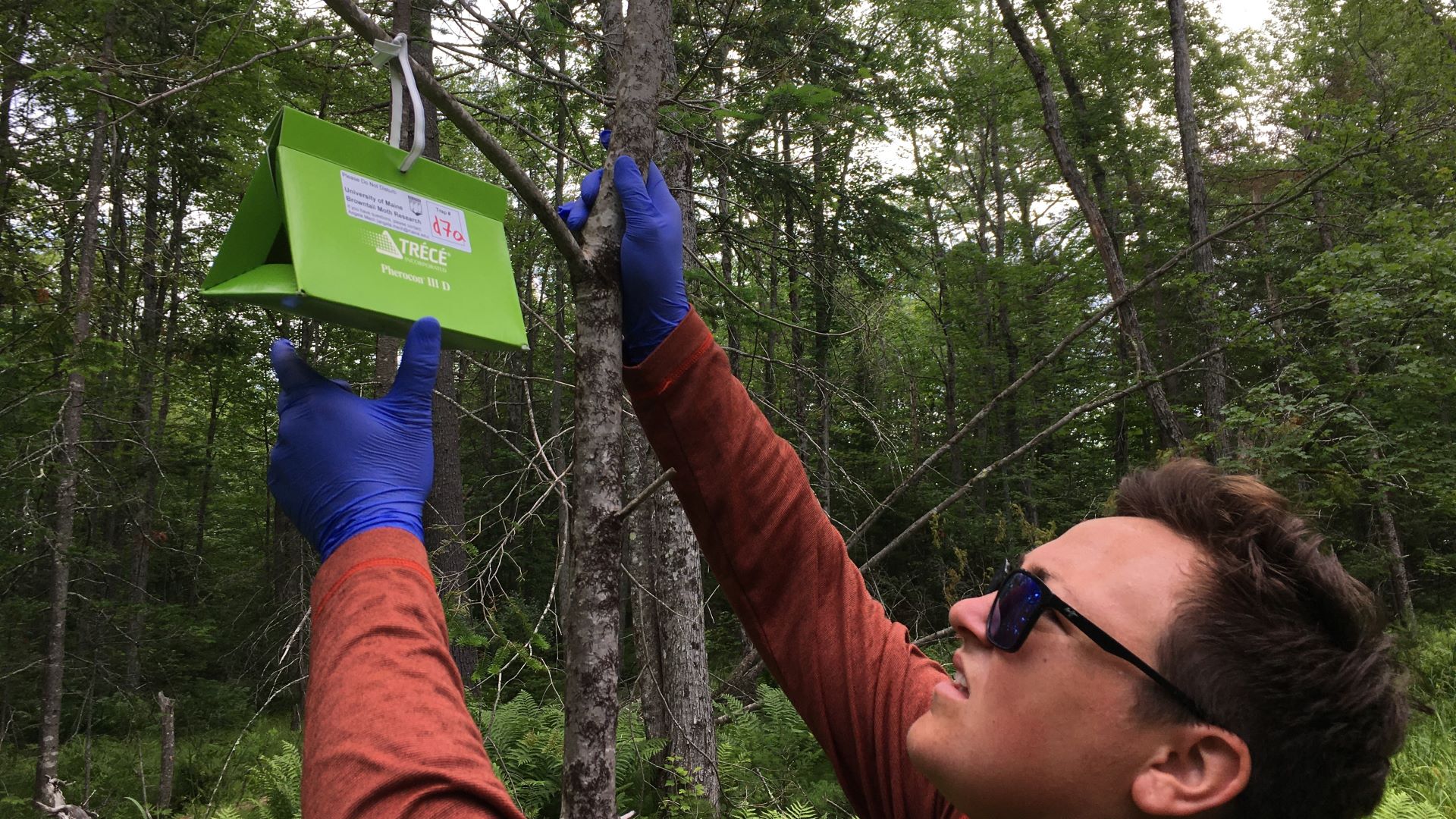 University of Maine graduate student Sadia Crosby setting up a pheromone-baited trap to help monitor population density of browntail moths to create a model that can predict outbreaks. Photo by Dr. Angela Mech.

Browntail moths, the invasive pests that can cause irritable rashes, breathing problems and extensive tree damage, have begun to emerge from their winter webs with experts predicting a likely repeat of last summer’s scourge.

But there are reasons for optimism. Rainy conditions in May and June could support a fungus that kills browntail moth caterpillars, and researchers this summer will test several other ways to control the insect.

Still, Mainers shouldn’t count on a reprieve this year, said Tom Schmeelk, an entomologist with the Maine Forest Service.

“I’m hoping that the rain will be prevalent and plentiful in May and June to collapse the population, but I’m expecting the worst,” Schmeelk said. “And people should plan for it to be the same as last year.”

Maine is in the middle of a browntail moth outbreak that began in 2015. Experts say it likely will take multiple years of rainy spring weather to end it.

However, this year brought some surprising news. The Maine Forest Service found dead caterpillars outside the winter nests, indicating the nests were infected with the fungal disease last fall, said Angela Mech, assistant professor of forest entomology at the University of Maine. Neither Schmeelk nor Mech had seen that before.

The brown caterpillars, which have white stripes on their sides and two orange spots on their hind end, sparked national interest last year. Their tiny hairs can cause a skin rash similar to poison ivy and remain toxic for up to three years.

They pose the greatest risk between April and July, when the larger caterpillars are active.

The Maine Forest Service conducts spring and fall aerial surveys to estimate tree foliage damage from the moths. And in the winter, Forest Service teams drive around and estimate the number of winter webs per tree in a given stretch of road. (Click here to view the 2022 winter survey.)

These surveys indicate that last year’s hotspots — such as Lewiston, Auburn, Turner and Manchester — likely will have it rough again this year, Schmeelk said.

Last summer, the moths damaged an estimated 200,000 acres of forest, although Schmeelk said it likely was more than that. Bad outbreaks in the early 2000s rarely reached 20,000 acres.

“The changing climate, and us having more of a tendency for drier springs and longer summers that extend into fall, are both conditions that favor browntail,” Schmeelk said. “Who knows what that might mean for the next outbreak after this, but this outbreak is definitely a few orders of magnitude greater than we’ve seen in the past few decades.”

Mainers do have options for addressing browntail moths in their area. The preferred option is to remove winter webs from trees, but it’s already too late for that this year. Trees also can be injected or sprayed with pesticides. It’s currently the right time for injections, but spraying will have to wait a few weeks until more leaves on trees. More information can be found on the Maine Forest Service website.

Portland will spray its trees between May 16-20. The city said a winter survey found “results that were improved from last year, but still concerning.” Researchers are studying other ways to control the pest, including testing a variety of targeted biopesticides that could have fewer harmful impacts on other species, said Mech, the UMaine professor. Many current options are considered “broad spectrum,” which means they can harm beneficial insects as well as browntail moths.

Her students also are helping her test which types of lightbulbs are least attractive to browntail moths at night by releasing the moths in a dark tunnel and recording which light they flock to. The results will lead to recommendations for homeowners who see the moths cluster around their outdoor lights.

Last summer, Mech and her colleagues tested different types of traps using pheromones, chemicals that alter sexual and other behaviors. This summer, at about 20 sites around the state, they will use those traps to begin monitoring population density, which will eventually create a model that can predict outbreaks. In collaboration with the University of New Hampshire, additional traps in New Hampshire, Massachusetts and some Maine islands will give an idea of populations across the region.

Mech said she feels optimistic about all these projects, but they are still in the early days and it could be a while before they become large-scale trials.